​
This mod aims to fix a few grievances with summons and flesh out Summoner to be a fully developed class. This vision of Summoner is a summoner who has his hands full buffing and controlling his minions and has little time for weapons himself.

Open Source: I am open to any coding help, the code is open source on GitHub. All the sprites are available there so have at it.

These Minion History Books allow you to summon sets of minions, aka loadouts. For example, if you like 3 Spiders, 2 Baby Slimes, and 1 Pirate minion, you can summon that in 1 click. The items will remember your preferred loadout. The loadout functionality is not found in the basic Minion Selection Book, but that item can help you spawn any minion from your inventory, so you can keep a single summon item in your hotbar.

To use these items, right click to open the UI, then select the minions you wish to summon. Right click in the middle to save your selection. You can now use left click to summon your loadout with a single click!

Big thanks to @direwolf420 for his huge help in implementing this feature. Also thanks to moonburn for the item sprites.

Summoners Association Card ​
Recipe: 10 Gel and 2 Wood at a Table and Chair 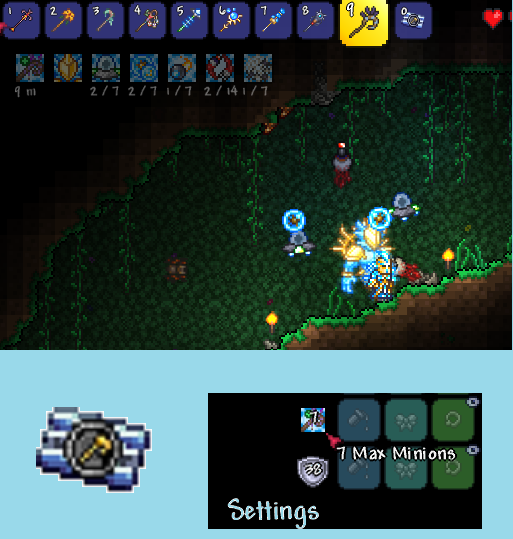 This magical mind control device allows you to exercise even greater control over your mindless minions. Simple point and click and your minions will obediently teleport to their destination.

Blood Talisman​
Recipe: Philosophers Stone and Cross Necklace at a Table and Chair

This powerful artifact allows the user to sacrifice mobility, health, and general well-being to greatly power-up their minions. The Blood Talisman extracts the life essence out of the users body and directs it at minions at a target. The targeted minions enjoy extreme strength the longer you can withstand the wretched mind-consuming powers of the Blood Talisman. (Suggestions for fair effects for this would be nice.)

Future Features:
I'd like this mod to eventually allow you to customize even more pure minion play. For example, I'd like to develop a system where different "gems" are placed in several "slots" in the Blood Talisman (or whatever it ends up being called). Each Gem will provide a buff to the minions and an appropriate debuff to the player. One gem, for example, could increase the area of effect of the buffs, allowing easier minion buffing, while simultaneously cutting the player's speed in half. Another "gem" could increase the buff ramp up time, while simultaneously preventing mount usage. Stuff like that. Trading the character's abilities to augment the minion abilities. Or not, who knows, heh.


Mod Support - How to add support for your mod​
Some Minions are special and require a Mod.Call to properly display. These include minions composed of multiple projectile types (Twins) and minions where the projectile count doesn't necessarily match up with the number of minions (Stardust Dragon). If your simple minion is not properly displaying, first make sure your minion summon item has bufftype set and shoot set to the minion projectile type. Also make sure that the projectile has minionSlots assigned as well.

If you have a special Minion with multiple projectiles or you want to override the minionSlots values, you'll need to use a Mod.Call call in Mod.PostSetupContent to inform Summoners Association. Make sure to follow the message format perfectly.

tModLoader
So with this so can more easily see how many of which minions you have summoned and your max minion count? That's pretty awesome!

Ahhh... it's the simple things in life which make my life a lot easier for the meantime and not knowing how many minions i have summoned due to damn UFO's flying off screen to kill harpies

It seems like a good idea to have the ability to have a targeting system for summons.

tModLoader
No new content, but updated to work with tModLoader v0.5.

Manual Targeting sounds great, I'll work on that if it is at all possible.

Im using it for tmodloader v0.6., there are 2 issues ive found so far. 1: All the weapons you had in that screenshot can be crafted with 1 piece of wood (stardust armor included). 2: The summoners association card displays its info when its on screen, so it works even when you simply look up the recipe for it with the guide.

PulseFox said:
Im using it for tmodloader v0.6., there are 2 issues ive found so far. 1: All the weapons you had in that screenshot can be crafted with 1 piece of wood (stardust armor included). 2: The summoners association card displays its info when its on screen, so it works even when you simply look up the recipe for it with the guide.
Click to expand...

WOW. This mod is so freaking cool! Keep it up!

Honestly im really impressed with the new update.I feel like this mod is essential for a summoner playthrough

I love the new update too
Are you planning on just adding utilities for summoners, or will you add summoner weapons.
I have an idea for a kind of upgraded and but not really Control Rod. Instead of teleporting the minions, they would fly toward the cursor. I'm not sure if this actually possible to add though.

ColinAV516 said:
I love the new update too
Are you planning on just adding utilities for summoners, or will you add summoner weapons.
I have an idea for a kind of upgraded and but not really Control Rod. Instead of teleporting the minions, they would fly toward the cursor. I'm not sure if this actually possible to add though.
Click to expand...

That could be possible, but it will probably require you to override the initial AI of ALL summonable minions which is next to impossible, because there will also be mods implementing their own minions and those minions are not quaranteed to implement the same pattern that is needed to make them follow the cursor.
G

jopojelly said:
Recipe: 10 Gel and 2 Wood at a Table and Chair
Click to expand...

That recipe is a bit lame in my opinion... Maybe the Merchant could sell it if you have a summon weapon in your inventory? Or if the Witch Doctor is in town?

is this even a Tmodloader mod?


or is everyone else not as good?

Endershot355 said:
is this even a Tmodloader mod?


or is everyone else not as good?
Click to expand...

This is a tmodloader mod.

ColinAV516 said:
This is a tmodloader mod.
Click to expand...

Sorry, I forgot to update the download on this thread. It should work now.

Summoners Association Card does not work when Autopause is enabled.

Recomendations:
-Minions that provide passive effects to player or other minions. EX:
1) time limit summon that protects the player or reduces damage taken by creating a barrier around the player. Combination of time limit and cool down to prevent OP-ness?
2) Summons that strenghten or provide additional effects to other minions attacks (Ichor, Cursed Fire)
3) Related minions that power each other up in each others presence.
4) Command wands other than teleportation such as: Stand Still, Keep Close and Slaughter.