Nice, I'm looking forward for it. It is nearly as exciting as Terraria 1.3 and Terraria: Otherworld.

Staff member
Moderator
Great! Is that when you'll pick testers too? Or is it open for everyone.

darthmorf said:
Great! Is that when you'll pick testers too? Or is it open for everyone.
Click to expand...

It's open to Everybody, I hope.

darthmorf said:
Great! Is that when you'll pick testers too? Or is it open for everyone.
Click to expand...

Everyone will be able to play the SP Beta.


Everybody said:
It's open to Everybody, I hope.
Click to expand...

You are right! And it's funny because your name is Everybody

Flippi said:
Everyone will be able to play the SP Beta.


You are right! And it's funny because your name is Everybody
Click to expand...

DGGI (Dis Guy Gets it)

Flippi said:
Everyone will be able to play the SP Beta.
Click to expand...

What happens if you add a new friendly NPC called The Viking to the Ocean Biome? Well I'd say you'd get the Frozen Ocean Biome: 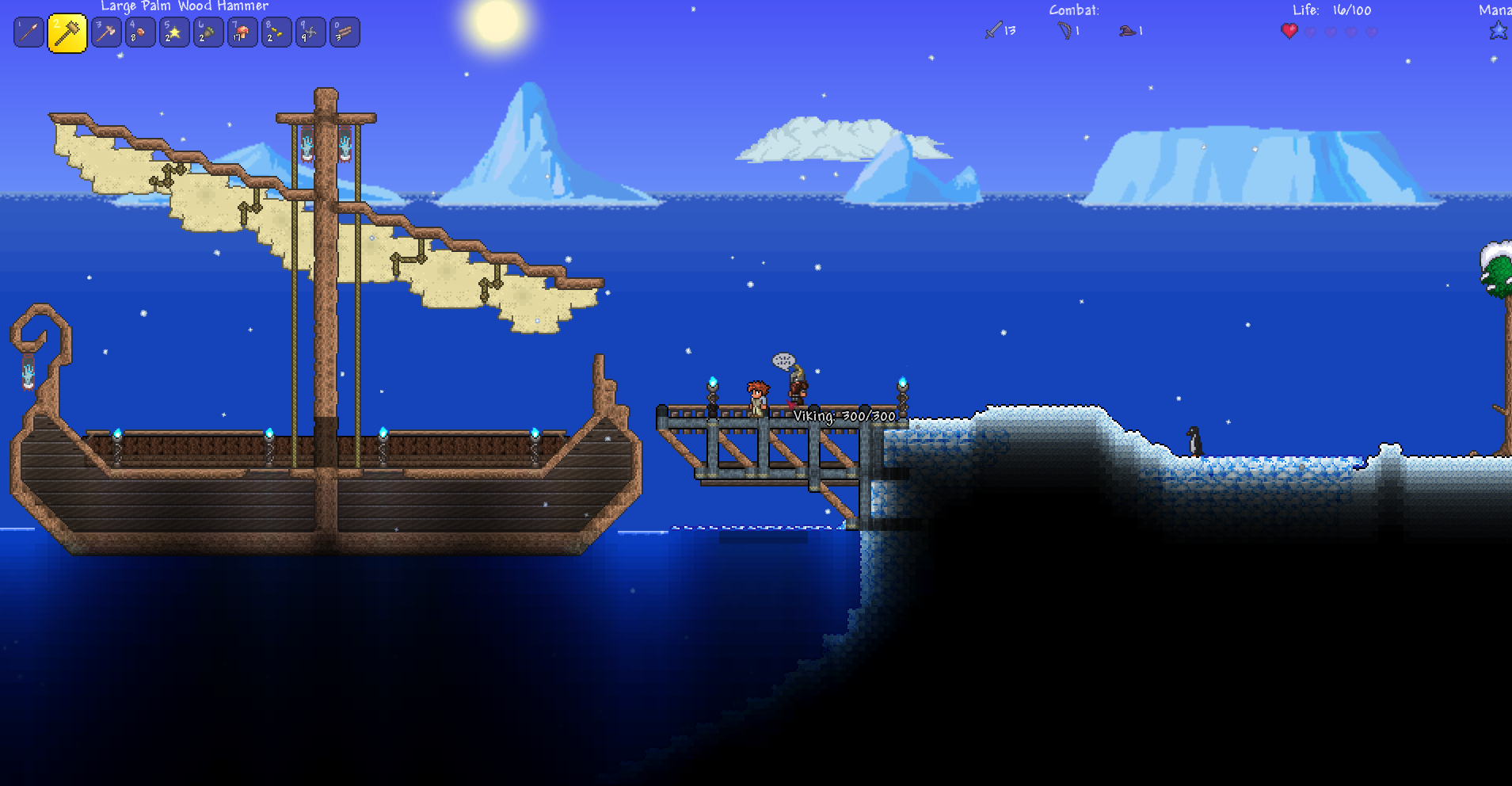 I guess the next question is, what does he do?

As always, a big thanks to @Jestex for the our new friendly NPC sprite and Frozen Ocean Biome Background and to @oSIVo for awesome builds on our STW maps!
Last edited: Feb 26, 2015

Ooooh! Frozen Ocean biome eh? Does that mean there are multiple oceans in the world?

malakhglitch said:
Ooooh! Frozen Ocean biome eh? Does that mean there are multiple oceans in the world?
Click to expand...

Not quite. If you recall this mod links maps together to create an "infinite" world. The only limit to this infinite world is how many maps we currently have made.

So for example this frozen ocean biome links to another map's ocean biome. How you connect to it is via the boat of course!

I am looking forward for the single player beta.
How big is the world going to be in it?

Flippi said:
Not quite. If you recall this mod links maps together to create an "infinite" world. The only limit to this infinite world is how many maps we currently have made.

So for example this frozen ocean biome links to another map's ocean biome. How you connect to it is via the boat of course!
Click to expand...

Forgive I cannot read
Well, I leave here (we should sleep)

August 9th 2015
It's been a little bit of time since we've made an announcement, and this is because it's been a busy summer for the whole team, and of course Terraria 1.3 had to be played on expert mode.

With this said we currently are on a slight dev pause (@Jestex is still pushing out sprites though, so give him an applaud) while we figure out the best way to import our STW changes into the new updates of Terraria - every time Terraria updates we need to decompile it and add our code back to it.

With that said if you wish to play STW 1.5 you will need Terraria 1.2.4.1, and thus I have all of that packaged up for you: http://bit.ly/1gNcGXD
To install navigate to: C:\Program Files (x86)\Steam\SteamApps\common\ rename your Terraria folder to TerrariaVanilla and then unzip the .rar from the link to this location and now you will have a new folder named Terraria that is Terraria 1.2.4.1 with the STW mod. Please note that if Re-Logic pushes an official update through Steam it will replace your Terraria 1.2.4.1 and STW and you will need to repeat this process.

We hope to have some new content coming up for you all shortly, so stay patient and keep up the feedback!


June 26th 2015
It's been over a month since the last release and that's because we've been quite busy on making one last GREAT update to hold you all over until Terraria 1.3 comes out. There's a new quest in the release called Minecart Madness, new ore regeneration mechanics - if you haven't seen the spoiler video you can by clicking here, and we've done A LOT of remapping of Sivania to help all players navigate above and below ground without getting stuck - this will make getting mining and combat levels much more pleasant.

Oh and to start the new quest just head on over to the mining village of Sivania and find the Demolitionist. He has had a bit a trouble with the newly implemented Minecart Junction. I'm sure a reward will help keep you on track!

You can view the complete changelog below:

May 22nd 2015:
With the release this week we've included a bunch of bug fixes as well as the Temple of Ra Quest! Make your way to the Desert Outpost of Sivania and try your best to Survive the Desert Pyramid's traps if you dare. A high reward is waiting for those who survive.

Several new tiles, items, and game mechanics have been implemented for this quest. We really hope you enjoy it!

May 1st 2015:
We've got quite the fishy update for you this week! We've have done a lot of work to revamp the Fishing Skill in Super Terraria World and this update is just the start! We've updated the Underground Lake in Sivania. Near the lake you will find the Angler NPC newly added to Sivania - read the sign at the entrance of the Mountain Pass for directions to Bait Shop! We've replaced the Terraria Angler Quest system with the Angler Challenge System - more information on the wiki!
We've also started implementing our next quest: The Temple of Ra. While not yet released, it has been added to the Quest Log!


Code:
April 17th 2015:
Just wanted to announce that a new version of STW is available to download. This update includes a bunch of bug fixes. We'll hopefully have some new content for you all to play around with next week!

April 2nd 2015:
We are happy to announce that we have a new SP Beta Client out and ready for testing! This version has quite a lot of bug fixes and changes to current STW content as well as adding new content like cave-ins for the tunnels of Sivania! Please visit the download thread to get SP Beta v1.2a! View the changelog for a list of all the updates. Also please check out the Super Terraria World Wiki - we are adding new things everyday, and so can you! As always, feedback is vital to the success of this mod so please leave some.


March 20th 2015:
It has been one week since we first released STW SP Beta and we are super happy with the feedback! We've been hard at work fixing bugs that you've found and we've also added some new tiles as well. If you'd like to see please visit the download thread because we've just released a new version of the SP Beta, v1.1a! The changelog has been updated in the thread as well, so please check it out!
Edit: Please always replace your maps when we release new clients as well because they have been updated and the game most likely will crash if you try to do Adventure Mode.

Code:
March 13th 2015:
I am happy to announce that after many months of working we have released our current alpha version of Super Terraria World to conduct our Single Player Beta testing!
Click here to go to the download an installation page!

March 9th 2015:
@Jestex has created a small spoiler video for you all to enjoy:


March 9th 2015:
Initial release of the STW Social Forums. Join the social forum to keep up to date with all things related to STW - like the official download link to the single player beta coming Friday March 13th!
Last edited: Aug 15, 2015

We have no plans to make this mod in any other language besides English.

Small announcement for everyone: The Super Terraria World Social Forum has been created: http://forums.terraria.org/index.php?social-forums/super-terraria-world.436/

Please join to get access to all things related to STW. The official download link to the Single Player Beta will be in the Social Forum

I hoped, that the transition would be possible without a loading screen. But since you are not going to the next world that often, it is not that bad.

Will Hardmode get into the mod at one point?

Airborn said:
I hoped, that the transition would be possible without a loading screen. But since you are not going to the next world that often, it is not that bad.
Click to expand...

It's not a loading screen, its a map/server change.

It is an elegant solution to a world with finite borders. Instead of changing the code so that it wraps around they just need to use at least 2 maps and connect them to each other.

Will it be possible for additional map areas to be added that goes on a tangent from the linear connection of maps? Like if someone sets up a server and connects it to either a single point in one map or a single point in multiple maps? Example: I make a house in 3 maps and ask that a teleporter inside those houses connect to my own map.
You must log in or register to reply here.
Share:
Facebook Twitter Reddit Pinterest Tumblr WhatsApp Email Share Link
Top Bottom