Is there a parrot in here?
D

Did you not just see what they posted?
C

505 Games Support said:
First, the team needs to be able to reproduce the issue, and so far they've been unable to do so. They have some ideas, but have not been able to isolate anything so far. Rest assured that the team is continuing to work on it.

Also, we'll be sure to post updates about this as we hear them. No need to keep asking... we know it's a top problem on that platform!
Click to expand...

I'll wait for fixes to thank the developers, I like Terraria 1.2.4

When is the update for bug fixes coming out

Is there a specific date when mobile/ios or laptop version will next update? Other than the Christmas one?

When I turned my cloud thingy back on, the cloud save Characters were gone.
D:

The rag_ed caster said:
When I turned my cloud thingy back on, the cloud save Characters were gone.
D:
Click to expand...

Im pissed of with this 2

This is a fixable issue in game, but I had my Fisher of Souls in the 4th spot in my hotbar, and if I put anything else in the fourth spot, the description would be the the Fisher of Souls' description, and it would render the item unusable. Not major, but I lost my Bug Net to it.

will add soundtracks 1.2.4 of space, ocean and underground crimson in the next patch ? e.ê

TerraDream274 said:
THERE ARE MANY BUGS THAT YOU DID NOT ADDRESS IN THAT POST. 505 REALLY BREAK MY HEART !!!

HERE IT IS @505 Games Support @505Games @505Games-Mobile
YOU DON'T EVEN APPRECIATE MY HARDWORK IN FINDING BUGS!!!!

* NPC heads in minimap are very big.
* Worm Duplication Glitch ( Using Rainbow Bricks.
* Mech Bosses do not drop their respectivedrops.
* Living Loom is not present on living trees.
* Wiring are not working properly
- Spears do not work properly, Timers do not tick/work properly. Actuators is goingcrazeee
* Torch Poor Animation
* Tooltips are in wrong items ( e.g. Naugthy Present : 15% bait power. Use as bait.)
* Firefly ( Animation Bug - Lights on their butt )
* Corruption's crazy generation
* Vanity Accessory Slot ( Q1 Update )
* Skins produce Iron Pickaxe when removed in the wall.
* Worms, Grasshoppers are quite slow to spawn.
* Enchanted Swords are quite common.
* Enemies Spawn Rate ( too low )
- Must have candle and battle potion inorder to feel the high spawn rate.
* Sunflowers bloom their light before thenight ( must be in the night )
* Maps shows wrong color when viewed ( e.g. Honey - color blue on minimal )
* Travelling Merchant arriving message.
* Truffle Worms spawn (supposed to bespawning in underground, too)
* Fishing : Cavern-Only Fish can befishthrough out the world.
* Guide do not have recipe guide ( since 1.0 ) ( maybe due to limited memory of mobile devices )
* Players and NPC/enemies cannot go down to a stair platform, they are all push upward.
* Spawning of critters and even enemies can be in your front, supposedly to be out ofscreen.
* Destroyer's laser are too big even thehealing orbs given by the Spectre Armor, supposedly to be in normal size.
* World is slightly shrunken.
- Supposed to be high, hypothetical reason why we cannot fish a specific fish/quest fish in the surface.
* Plantera's Boss Music playing on Frost Moon.
* Beetle Armor (animation and buff given by it bug)
* Auto - aim feature malfunctioning, only detects closer enemies, unable to detect far enemies.
* Hammer (Joystick Coordination)
* NPC Glitch (spawning in a solid place)
* Worlds are smaller than the small worldsin the PC (I know it is designed so that mobile can handle it).
* Terrain Genaration (Q1 Update)
* Rain becomes fast when usingtouchscreen on point placing.
Click to expand...

IKR! I set my spears too close to each other and they flew upwards, dealing damage to me after hitting a solid surface.

I was summoning the Frost Legion and came across a bug, the enemies of invasion are not attacking me, they're just walking around the place... 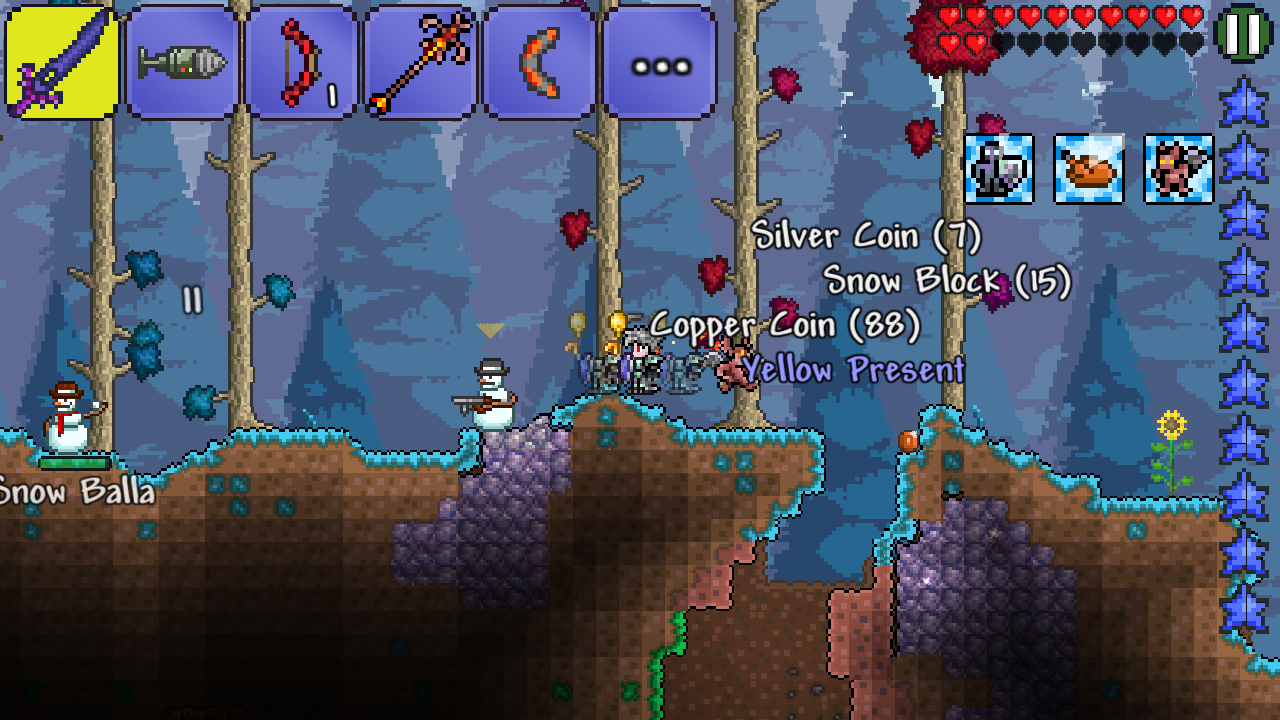 and this snow balla was walking contrary to the direction he was looking ... ._.

@505 Games Support @505Games @505Games-Mobile Do the world in the next bugfix/patch/update will be larger? ( somewhat at least near to the measurement of the small worlds in PC ) see the comparison 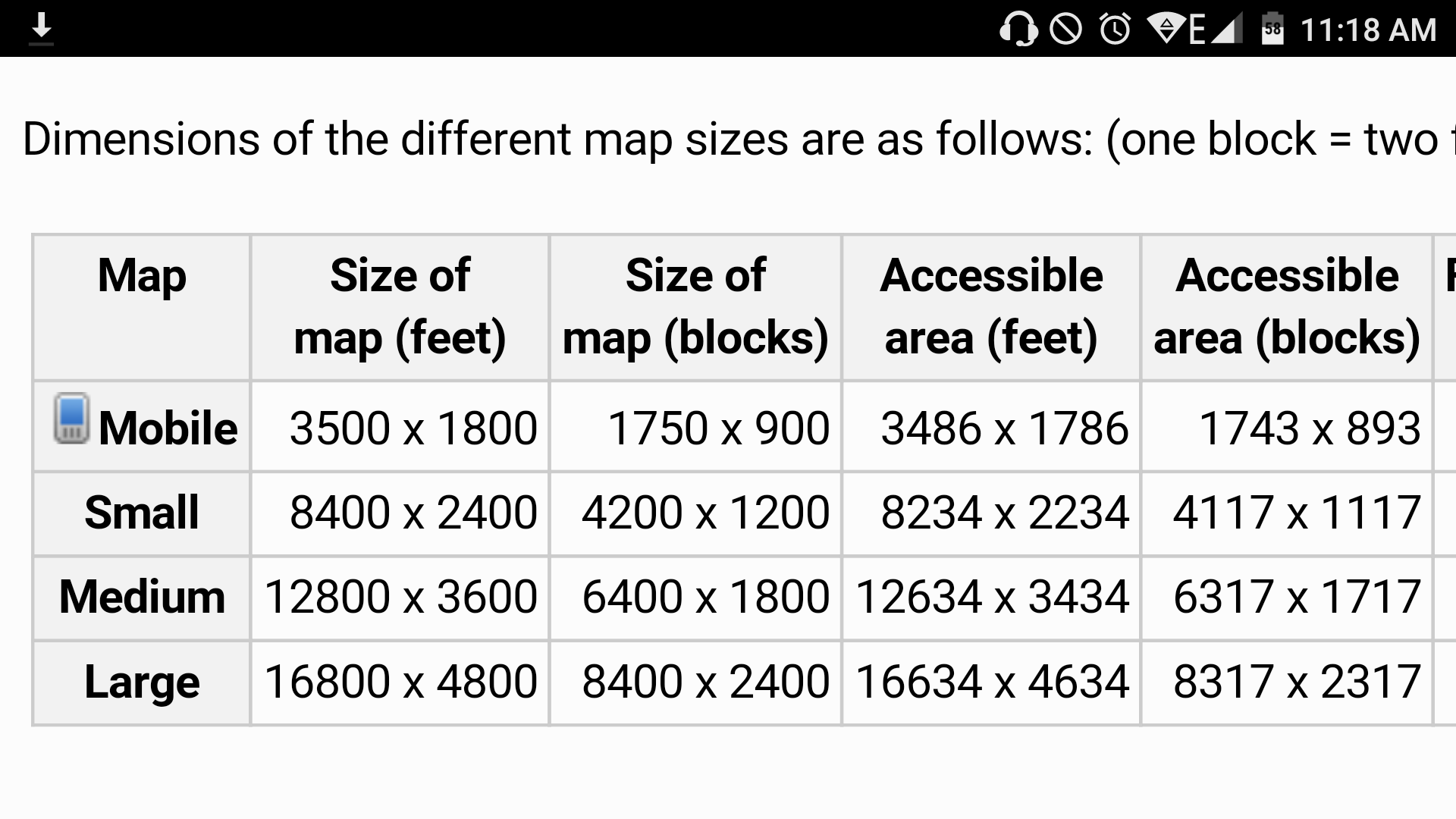 Ita only my traps (spike etc) and timers that arent working?

Construction potion makes you not consume any items.
S

505Games-Mobile said:
THIS THREAD WILL BE CONTINUOUSLY UPDATED AS FURTHER INFORMATION COMES IN FROM THE COMMUNITY AND/OR THE DEVELOPMENT TEAM, SO KEEP AN EYE ON THIS SPACE!!!​
Hi everyone,

Well, it’s been a crazy week since the 1.2.4 update was launched on mobile, to say the least! We’ve been thrilled to see what players have been discovering, but that also means there have been a number of new bugs coming up that our teams need to squash. As part of our mission to communicate as clearly and openly with you as possible, we will be using this thread to keep track of and update issues with the mobile versions of Terraria, so that you can see where we stand on each of them.

We’ll also include general updates at the top about some of the biggest issues affecting each individual platform, and where we currently stand. We all believe it’s just as important for you to know about what’s being fixed as it is to know when we still can’t reproduce a problem or don’t have a solution yet.

Things may seem slightly messy at first as we filter all the data and get everything organized and vetted against our own internal systems, but again, this will serve as a great one-stop place for you to see what’s going on with the current version and future updates.

With that being said, let’s jump in, shall we? Hope you brought your Flippers!

Confirmed & Potential Bug Fixes:​
Confirmed fixes and potential fixes for the next patch:
By Design / Unable to Reproduce:

Whew! Did you get all of that? Apologies for any typos, duplicates, or other errors, but we wanted to make sure to get this out there for everyone ASAP. Additional updates coming soon, although you may very well receive the next patch before we get this mammoth post updated. That's what we're hoping for anyway.

Thanks again for your patience and understanding, and Happy Holidays everyone!
Click to expand...

[DOUBLEPOST=1450327198,1450326853][/DOUBLEPOST]Honestly update is going pretty decent for me I haven't had all of the bugs but kinda sad I can't fish easily (I need to shake the virtual joystick for 5 minutes before getting and accurate reel.[I found that fly low and aiming down with the joystick and land up on a block helped]) My one major dissapointment is I'm huge on farms like half my world is mined up and laced in farms (prepped one for frost moon) have a Halloween one,'key mold grinder, dungeon fringed Crimson grinder corruption grinder gold farms etc. And all the wiring is inconsistent which isn't even the worst part. My timers don't work... And if you build these machines you don't want to flick a switch and hope it works! REVIVE THE TIMERS PLEASE!!!
[DOUBLEPOST=1450327240][/DOUBLEPOST]

505 Games Support said:
First, the team needs to be able to reproduce the issue, and so far they've been unable to do so. They have some ideas, but have not been able to isolate anything so far. Rest assured that the team is continuing to work on it.

Also, we'll be sure to post updates about this as we hear them. No need to keep asking... we know it's a top problem on that platform!
Click to expand...

Timers and wiring are a huge deal for me, aswell I can't spawn the goblin army? I need to spawn them to get the goblin tinkerer in my new 1.2.4 world! I have no access to a tinkerers table and badly need a quick patch from these things!

When will the next update be

Cant play terraria like this..yes i just started all over again!

Thats already makes me pissed off,but now my itens are disapearing when i touch it(?)
What the hell!
I cant even play with all the loss i has...
I expect that with the new updates all start over again,without the tons of bugs and stuff like this..