Terraria State of the Game: February 2020

So much love is in the air this month (and even an extra day to boot!), we cannot help but take time out to make sure to mention just how much we appreciate each and every one of you! We hope that you will find the sweet treats below to your liking. We know everyone is anxious for release dates for everything - nothing specific to share this month, but we think you will start to see a few things rolling your way at least on the Console/Mobile side of the house... and progress on Journey's End continues unabated. That said, let's open this box of chocolates and see what we get....

So, what's been going on in the land of Console? Just a few things, really.

We are happy to share that the release of Terraria 1.3.5 for XB1 and PS4 should be coming very soon. We have passed all of the internal reviews, and we are just getting everything all set to be able to submit to Microsoft and Sony for review/approval/release. We do not have an exact date to give you JUST yet - but know that sweet, sweet parity for XB1/PS4 Terrarians is just around the corner. Here is a fun random image - maybe you can spot a few of the 1.3.5 items inside? 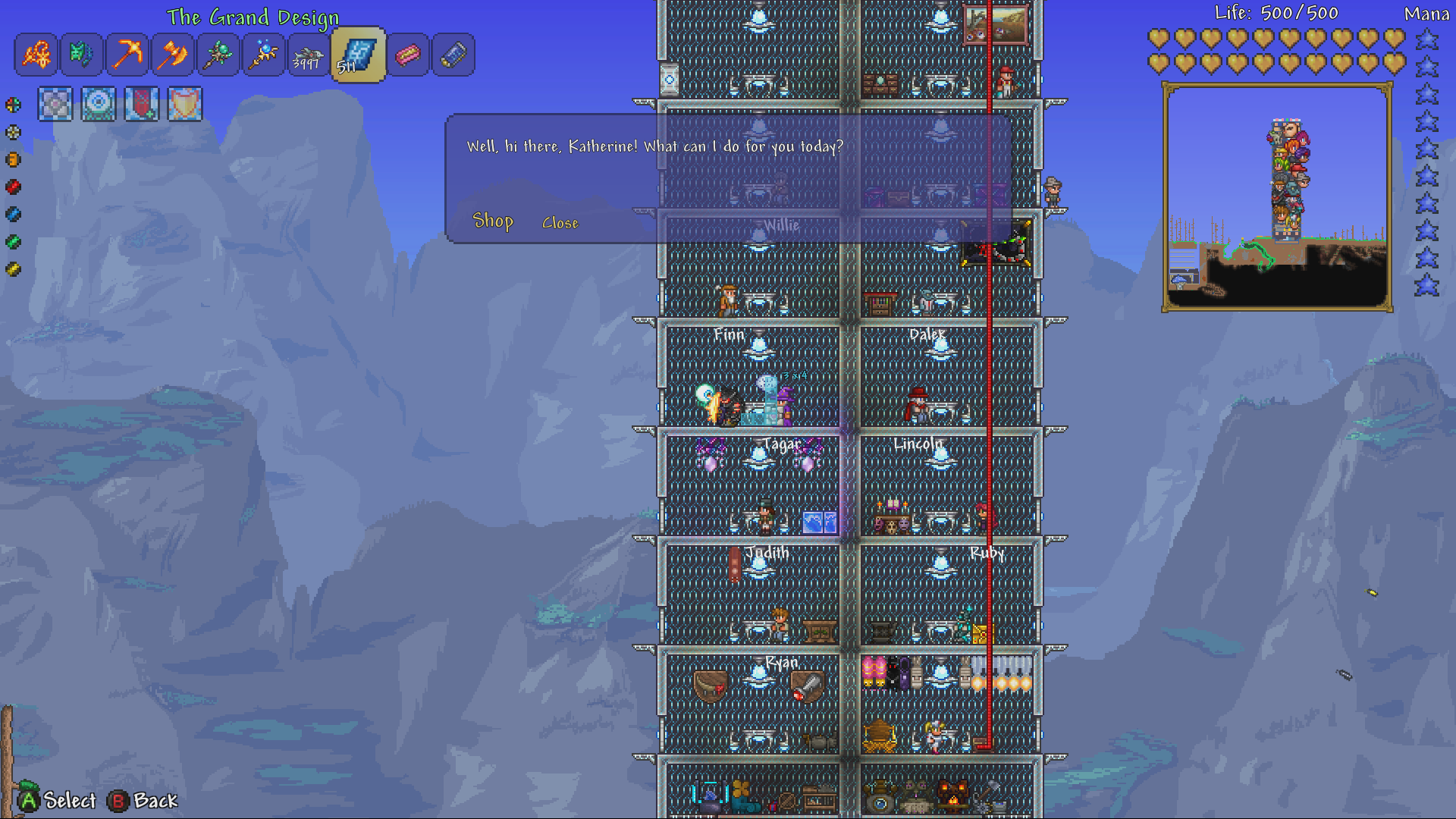 ​
Over in Switch land, we have been hard at work on smashing a number of bugs that the testers uncovered when checking out all of the content we are trying to pack into this leap from 1.3.1 to 1.3.5! Most of those have been dealt with, but we are diving headlong into some nagging performance/stability issues before we can call this ready to go. We know everyone will appreciate the extra work on that front, even if it means the 1.3.5 update takes a bit more time than any of us would like. Hang in there!

To help the wait, enjoy a few screens from the Old One's Army running on Switch! 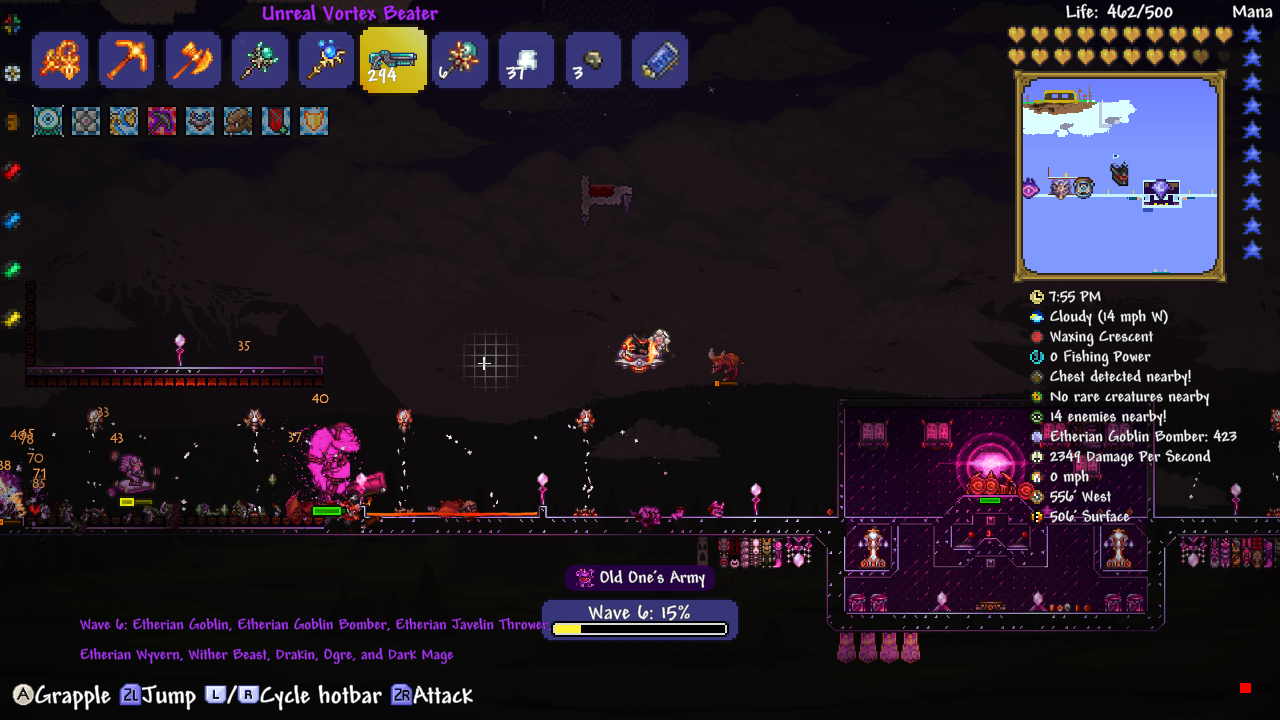 Did someone order a Blood Moon - Old Ones Army combo? 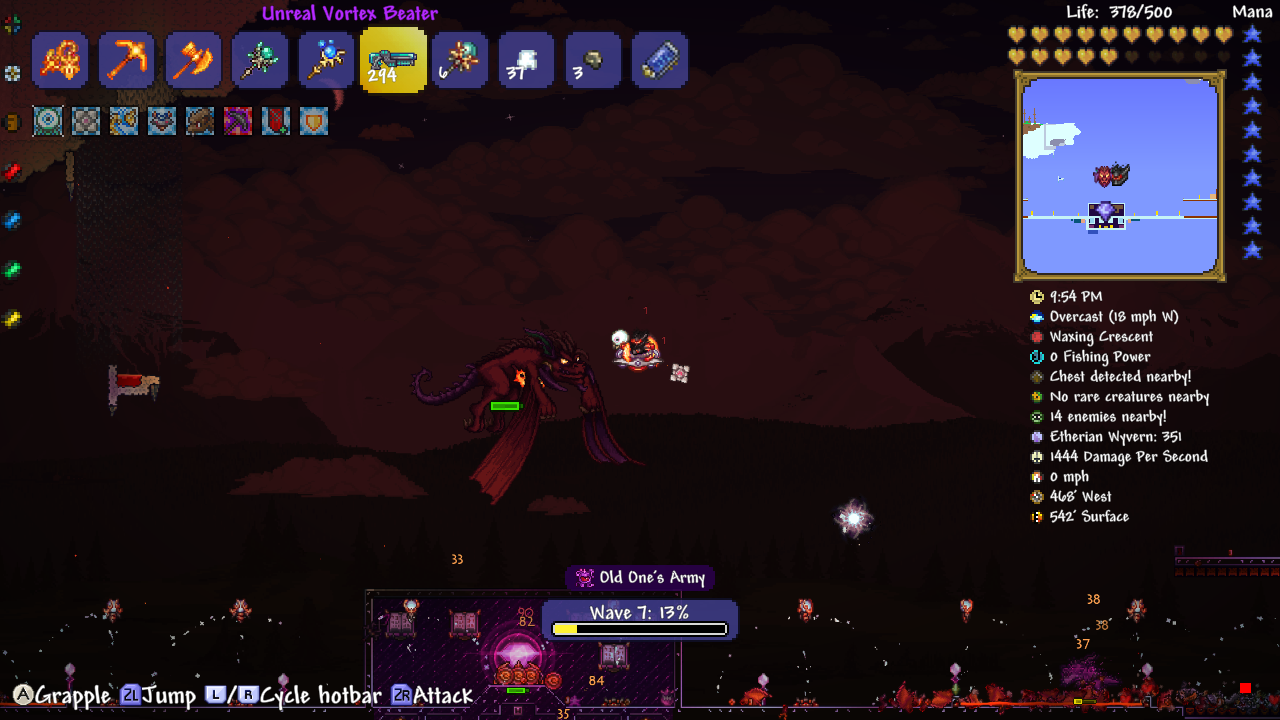 ​
Last month, we showed off some pretty exciting stuff indeed - controller support in a fully-functional state as well as a very early Apple TV build. During February, we have continued to make great strides on further polishing and fine-tuning controller support - but we know that plenty of you are probably wondering "What about the second 'C' in the 'Controller & Customizations' update?".

Well, we are happy to show some of the first screens of at least the first wave of customization options that we have implemented. This first phase is focused primarily on remapping - or even disabling - of the various control buttons/sticks. Our mantra has mostly been "player freedom" here, so do keep in mind that with all these options available, it is very possible to make some control schemes that are quite limited in capability. For a few schemes that we suspect might be more common, we are working on some potential toggles in Settings that will make this easier. That said, by opening things up - we can truly allow the players to make the controls fit however they choose to play. Want some examples? Sure you do...

Here is our current remapping interface (WIP, so subject to change!)

Starting simple, here is a setup where some buttons have been remapped, and others disabled altogether (Melee player? Who needs that Quick Mana button?)

Here we have even remapped the zoom buttons (or more to the point, turned them off) - and changed our grapplestick to a grapple button using the cursor (that's right, you can do both)!

How about a left-right swap?

We hope those are enough to whet your appetite for now. We are still playing around with other aspects of the Customization angle of the update. It is unlikely that "literally do anything" (especially in regards to the notion of being able to drag button placements around to literally anywhere) will be possible, but what we mean there will make more sense as we are able to show you more of what we have in mind once we can.

Should not be too much longer until we can get this into your hands - pending testing/iterations/etc. No dates to give, but just to say it is starting to feel like we are getting really close.

​
February already? Time sure flies when you are having fun.

What have we been having fun with this month? Funny you should ask...

We managed to sneak word out from the top secret Terraria labs that the team has been working on something mysterious - which, if the rumors are true, supposedly will change the way a lot of players approach some core aspects of the game.

I don't know, the whole thing sounds rather suspicious to me... what could this possibly be and what could it mean?

As we have been long in development for Journey's End (as you all know) - we wanted to remind everyone of the handy-dandy Journey's End Spoiler Compendium. Maybe you missed a spoiler or have forgotten some of the epic stuff that is coming your way down the road? No time like the present to refresh your memory!

Until next month, enjoy your speculation.

We thought we would start out the Community section by giving a shout-out to our State of the Game Banner contest winners for this month. Featured in the lovely February banner above are the characters submitted by:

There we so many great entries - we had to draw the line somewhere, but it was really tough! We plan on continuing this contest moving forward, so be sure to submit your favorite characters for possible inclusion in a future State of the Game banner in the next month's submission thread linked below:


MARCH SUBMIT YOUR CHARACTER - STEAMPUNK THEME​
Be sure to read over the latest theme and guidelines for submission - and good luck to everyone! We really enjoy seeing your awesome characters.

One of our goals for 2020 is to introduce recurring community features that will serve to upgrade the overall Terraria experience. In January, we began hosting the official Terraria weekly stream. Thus far the stream has been a huge success with plenty of excitement, content reviews, games, prizes, spoilers, entertainment, and feedback from our community panel. Last week we had an awesome review of Ningishu’s expert 45-minute Moon Lord run. This week we have a very special episode planned for the community. 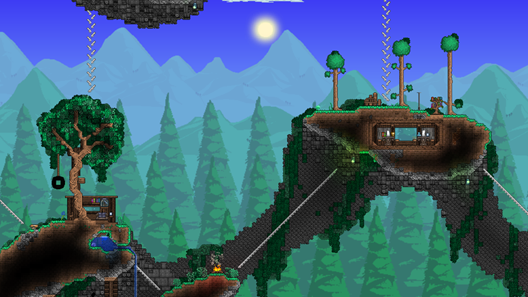 We will gradually make upgrades to the tournament structure, prizes, and rules. However, this first trial tournament will consist of 8 players. The first player to reach five kills wins the duel. The tournament is vanilla-focused, but a few modifications have been made to weapons to provide a more fun experience. The invincibility frames have been lowered, and some weapon's damage and use time have been modified. PvP plugins were provided by Johuan. The arena was made by Avery, Blanc, and SolarDeity. The list of players competing in this first tournament will be: Kyro, Blanc, Tisu, Johuan, Cloode, Kishou, Last Remote, and harmfulcrane.

Joining our stream community panel for this epic first tournament will be Badger, GameRaiders101, FuryForged, Mousie, and Khaios

We will reveal the full tournament details and prizes during the live stream. If you are interested in watching this first official tournament live then come join us @ 1PM PST @ Twitch 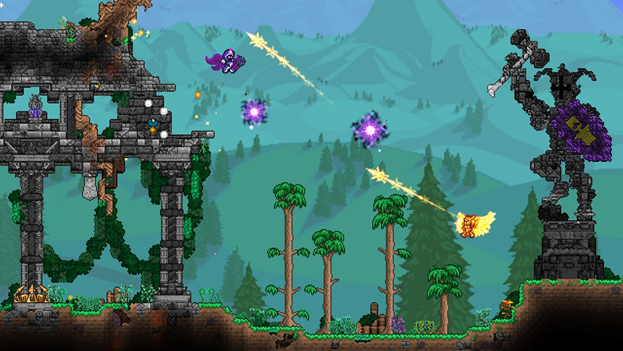 Darn it, no release date… I guess that tease was pretty interesting, though.

Hopefully an official PVP tournament will reveal to the general public how much of a joke PVP is with it's bugs.

Literally no one likes when you do that.

Well, I can't see any new spoilers....
well haha this was

Anyway, fine state of the game.

A shame no new content for 1.4 was revealed, but maybe that's because you're close to releasing it

I decided to join the club of weirdos who just type "First" and leave the page.

I find it amusing that a vague promise of core gameplay changes is far more appealing and intriguing to me than most of the recent spoilers.

Danny Ω said:
I decided to join the club of weirdos who just type "First" and leave the page.
Click to expand...

Don't. That's the lowest part of every community.

Time to make random guesses at what that hint at 1.4 could possibly have meant...

Mobile UI is getting less overwhelming.

Danny Ω said:
I decided to join the club of weirdos who just type "First" and leave the page.
Click to expand...

Please don't do that, it's annoying to most people. Also it's technically 'lack of content' or 'off-topic', either of which could earn you a warning.

So much customization for mobile controls!

Staff member
Moderator
It is exciting to hear that Console players will have the same content PC is currently has! It has been a long wait, but it sounds like the wait is almost over.

Aurora3500 said:
It is exciting to hear that Console players will have the same content PC is currently has! It has been a long wait, but it sounds like the wait is almost over.
Click to expand...

But for how long until PC pulls ahead again

Interesting, I wonder what these core gameplay changes will end up being.

Those vines seem new... so are these new sets... tiara princess? Still, pretty much small o' spoilers there...

They aren't new sets, they're current 1.3.5 ones. They're just using dyes and accessories on mannequins, which have already been revealed. The Flower Vines were revealed in the windy day music spoiler, as well.

Derpling Ω said:
They aren't new sets. They're just using dyes and accessories on mannequins, which have already been revealed.
Click to expand...

Oh right, silly me. At least I see the rocks retextured there...

Do you mean the winning vanity sets of the State of the Game banner contest?

Got a cool vanity character? See it used in the State of the Game Banner!

Hello Terrarians! As you know, each month we have a State of the Game, which is a community update on development progress across all active platforms. In these State of the Game threads a banner is included at the top to start it off, and that’s where you can get involved. Want to see your...