Hello! So, here's my little contribution, right as i dived in the game 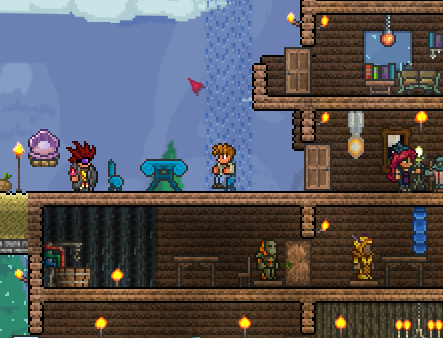 Otherwise, the NPC communication is awesome, although i have no idea what to make out of their conversations.


P.S. I love the new sounds i've encountered so far. I'm not going to ask how you made the death sound for the Black Recluse. The underworld background and music are awesome!
Last edited: Jun 30, 2015

Open steam and it should have an update queued. If you hover over library a small menu pops up that at the bottom says 'Download', click that and then click the up arrow to the right of Terraria.
C

Yes i like this. This is good, so far the update has been doing great with the new multiplayer and stuff. Good job re-logic
K

I just updated, and 1.3 started like slideshow on my computer. Thanks for raising requirements, now i don't have a game to play.
H

I have heard that the hardmode bosses are way too hard on expert mode...
C

Cant open the game, after downloading the update. Steam says "Error. Please launch the game from your Steam client" And I am launching it through steam. Already tried to reinstall whole game, didn't work.

Pirate Maps and Snow Globe (event starters) does not stack like the other event/boss starters.

Mine keeps getting the "Terraria has stopped working..." error =/

Esparado said:
Pirate Maps and Snow Globe (event starters) does not stack like the other event/boss starters.
Click to expand...

It has always been like that so I hardly think that is not a bug.

About achievements, I find the artworks wonderful, great job
However, I think it would be great to add some achievements that aren't directly linked with things that people have already done before (if they played the previous versions)
Maybe something like "Dye yourself with 7 different colors" or "Kill every hardmode boss with a Turtle Armor" (the player has to return damage to kill)
I wrote some ideas on the topic that was made for that but unfortunately, it was too late ^^
http://forums.terraria.org/index.php?threads/1-3-achievement-suggestions.13344/page-94#post-563509
C

Alright, I found this weird terrain generation glitch at the edge of the desert, I tried to take a picture of it with the new camera feature but I don't know where to find the picture.

Only PC for now

Unfortunately, that will have to be coded and released at a later date. This is a PC only release for now.
I

Is there an official release date for Mac yet?

Okay so i love the new update. alot of content has been added.... but the game lags so bad. It fixed it a littlewhen i disabled placement preview but it still cant handle fast placement of objects like the previous version could. Please fix that i want to be able to press escape and ckicl on dirt blocks and place them under 3 seconds while im being swarmed by zombies.

imDED said:
Is there an official release date for Mac yet?
Click to expand...

No, not yet, we hope to release it by the end of July, but that's not confirmed yet.
H

Many things on this update are really nice. BUT I have some things, that I hate in the new version and let me want to downgrade again.
- You can't replace the Wave Bank.xwb file for custom music (that was a really nice thing) anymore,
if you do, the music sets it to 0% in options all the time and donesn't change
- Drop 75% of Money instead 50% and I think, that is really sad
- Be longer dead, if you died in a boss battle makes the game more difficulty than before
- Enemies can steal your money and run away, so you have only a small chance, to get it back
So, all that points, are really important for me and take my pleasure for the new update.
If you will fix this in 1.3.1.0 (or whatever update version) I will play the update.
But at the moment, these things cover up the good things from the update.

So, now some good points, so that I don't come only with negative things.
- It's really cool to see, how much money you lose on dead
- The death point is REALLY nice and helpful
- The new Sprites, Animations and Arts are beautiful
- I am enjoying, that NPCs are now not so weak

So, that is a feedback, from myself. I hope you take my bad things to your heard and fix it in a new update.
That was all.
Greetings ManuelMihay