We wanted to reach out to everyone today in the spirit of celebration and appreciation for one of our own – the one and only Terraria Lead Coding Wizard, Yoraiz0r! 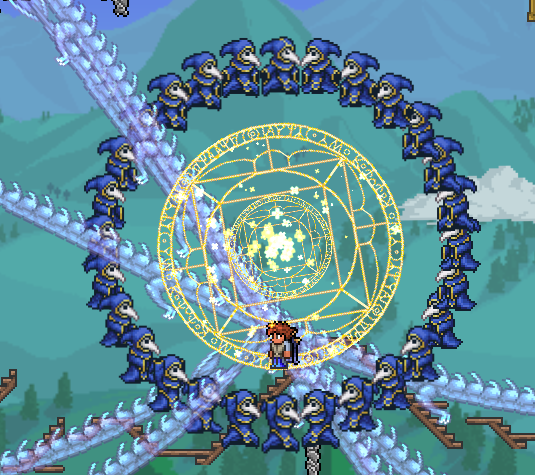 The Cult of Yorai​

That’s right, its Yorai’s birthday today and that got us to thinking about his tremendous contributions to Terraria and its community. From his “humble” beginnings as one of the driving forces behind the early backbones of the Terraria modding community (tConfig & tAPI) to his amazing work since early 2014, Yorai’s impact on Terraria and Terrarians is unmistakable and irrefutable. So, on behalf of our team and Terrarians everywhere, we ask everyone to lift a glass in a toast to the Wizard himself!

In honor of the occasion, we thought we would show off one of his latest works of art… and what better way to celebrate than with the Celebration Mk. II!!!​

Some fun facts about our very own Lead Developer:
Modder

Officially joined the Terraria team on January 6, 2014. Yorai has been instrumental in everything added to the game since joining. Since that time, Terraria has moved from v1.2.2 to 1.3.5 (with 1.3.6 to come!). To give you a sense for what all he has had a hand in during that time…


Beyond all of that, Yorai is an amazing person – which is really most important of all.

So, cheers and happy birthday to you, Yorai! On behalf of the Re-Logic family and the Terraria community, thank you so much for all that you do and for who you are!
Last edited by a moderator: Mar 22, 2018

Really appreciate all that you do and all that you are. Thanks for being you and being awesome - here's to many more!

Happy birthday Yorai! You're such an inspiration, keep being the amazing person you are!

Staff member
Moderator
Thanks Yorai for all you've done and still do for Terraria and it's community!! Wishing you the happiest of birthdays ^_^

Duke Fishron, QuickStack, and SmartCursor along with the Lunar Events were fantastic additions to the game, and I thank you for working so hard to make these things a reality for the game.

It is wonderful to talk with you about several other things as welll, whether it be Anime like Madoka Magica, or other games. Anytime we get to talk, it's always exciting!

Hope it's an awesome Birthday for you!

Happy b-day Yorai! I don't know what I'd do without quick stack, so many thanks!

Staff member
Moderator
Happy birthday my dude, you share the distinct privilege of sharing this day with my dad; and I'm not saying Yorai is my dad, but I've never seen the two of them in the same place at the same time.

Staff member
Moderator
Happy birthday dude! I cant wait to see what crazy lasers you come up with next!

Yoraiz0r, happy birthday to you!

Happy Birthday man! You do great things for Terraria and for our team every day, and we're extremely lucky to have you around! Many happy returns!

Happy birthday Yoraiz0r! I wish you to have a great celebration today!
P.S. add more crazy weapons, we all like them! ;D