May is here - and with it comes the start of the Summer months for some of us out there. We hope that whether you are getting ready for Summer or are already there, that you will have an amazing and relaxing time - and stay cool as things heat up. Of course, you can always head inside for some Terraria - and we do hope that we will be a big part of your summer plans! So, what's going on in the world of our various development and community teams? Let's dig right on in and find out!

Another month in and even more amazing creations keep pouring into the Terraria Steam Workshop! With nearly 13,000 uploads and growing, there are so many packs and worlds out there to try - if you haven't checked out what the Workshop has to offer, you are seriously missing out!!!

Click the banner above to check out the Terraria Workshop!

The team is keeping its list of possible future Developer's Choice uploads on Steam Workshop continuously updated - so make sure that you keep an eye out for which great packs and worlds will earn this honor next! Nothing new to add just yet, but we plan to roll out our next wave of selections soon - maybe in the next State of the Game!

Oh yeah, in case you missed it, our favorite sandbox adventure game officially turned ten years old a few days ago. We have been really enjoying the various outpourings of love, tributes, and more as we take some time to celebrate with each of you. If we haven't said it lately, we really appreciate you and your support over the years - it is what drives us and makes all of this possible. The celebration isn't over yet, though!

Be sure to check out the festivities - past, present, and future - on our 10th Anniversary Thread, linked below!

Also, you still have time to enter our amazing 10th Anniversary Contest - where you can win prizes that include Steam Wallet cash, pin sets from Sanshee, or even the grand prize - your very own amazing Forest Biome display set from our friends at Animegami Studios!

Click the banner below to find out more and get your entry in today!

As always, keep your bug reports coming via the handy bug report button below!

Another month has flown by, and the TML Team - along with all of our amazing contributors - have remained hard at work to bring tModLoader up to the 1.4 era.

You can see our current milestone at tModLoader/tModLoader (But note that the completion percentage doesn't mean anything, because issues and PRs don't have weights.)

An official alpha/beta version remains very likely - more on that as we have more to share. After we're done with that testing and any related fixes, release will be very close! At this time, however, we still can't give anyone an ETA for the full release.

May is here, bringing with it hotter temps and a steady flow of progress on Journey's End for Consoles. The team has cleared two more milestone gates since last we checked in with you here, and we remain on pace for our previously-revealed Q3 2021 launch window. We cannot narrow that down yet at this point as there are still a good number of nebulous pieces on the list where we cannot make a confident prediction either way time-wise. We will seek to tighten up the launch timing as soon as we feel good about doing so - but for now, just know that everything is very much in the green in terms of our plans.

Now, all that said, you know we wouldn't leave you without some sneak peek into what we have been working on this month. Let's take a quick look, shall we?


Nothing cools off a hot day more than some Blood Moon Fishing, right? (oh and you can catch a gander at the latest iterations of the UI while you are at it )

We have a few other things that we are looking forward to sharing... but they are not quite ready for prime time just yet.


Repeating what we shared above, we expect to have Journey's End for Switch out later this year, just a bit behind Xbox and PlayStation.

Back to Table of Contents

The console train keeps moving steadily down the track - which means every day closer to Console Journey's End is also one day closer to our return to progress on Mobile. We cannot wait to be able to bring Mobile (and Console) up to content parity and then start exploring what future opportunities that will unlock. Hang with us just a bit longer, mobile fans - your time for news will come soon enough!

Thanks as always for the honor and trust you give us each month to work on Terraria - it is not a responsibility that we take lightly, and we look forward to bringing more amazing things to you all as we move forward.

We still have a handful of partnerships that remain under wraps, but that we will be revealing just as soon as the time is right. That said, what better time than the State of the Game to check in on news from our existing partners as well as to shine a light on some other things that are in the works?

Our great friends at Animegami Studios have released a sneak peek into the pre-production prototype of the upcoming Forest Biome Display. This will be available for preorder (and you will get to see its final form - in color this time!) in the very near future. Definitely something that you will want to keep an eye on!

Re-Logic and Skyland arts have teamed up to create a new line of premium limited edition art toys and character figures from the world of Terraria.

Wave 1A consists of 3 premium figures and is in production now! These will be available for pre-order in about 4 weeks. Each figure will be roughly 4 inches tall and will retail for $20 each. First-look news, production photos, and more details will be rolling out in the next few days and weeks on Skyland Arts social media, so be sure to follow them on Facebook @TheSkylandArts, on InstaGram @SkylandArts, and sign up for email updates at SkylandArts.com. 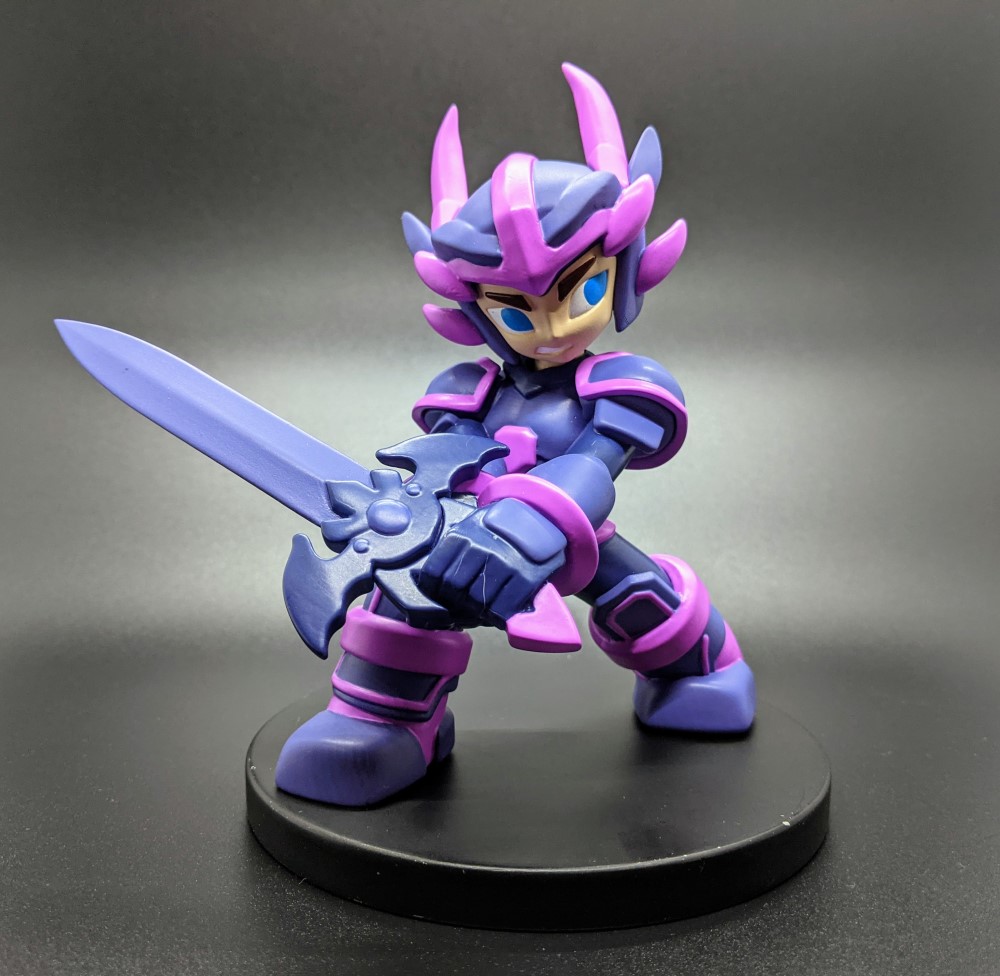 The first character preview is here now! Here's a peek at the production prototype of a player in Shadow Armor wielding Light's Bane. 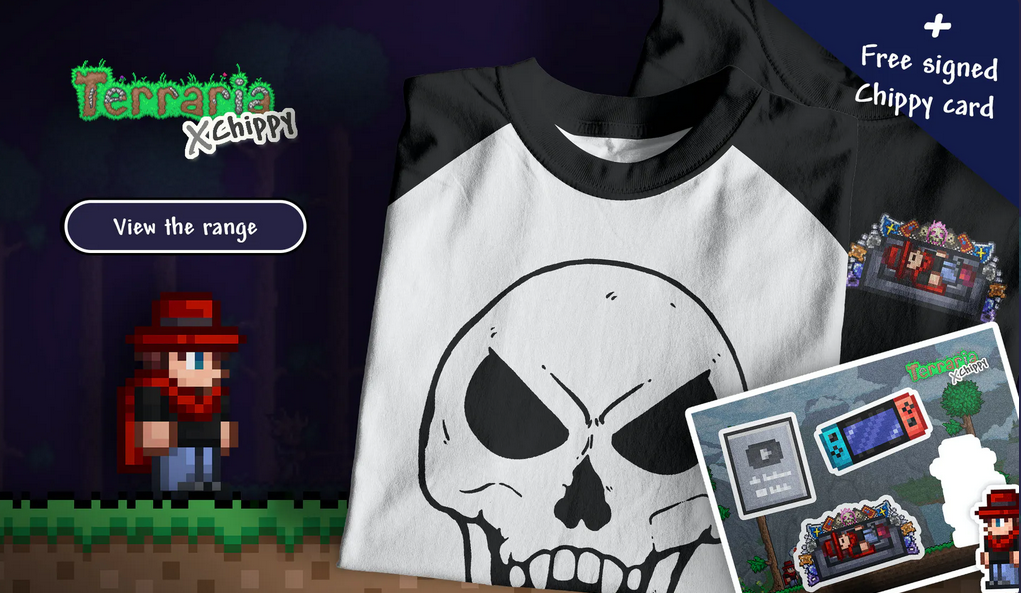 As of last week, the Terraria x Chippy merchandise collection is now available! Co-designed by your favorite Terraria Enthusiast himself, each of these items are a fitting tribute to Chippy and the impact he has had on the Terraria community for so many years. Check out everything that there is on offer by clicking the banner above!

Heading into the 10th Anniversary, we ran two contests in parallel - one for in-game builds and one that challenged Terrarians to craft their very own Terraria Birthday Cards. We are happy to reveal the winners of the In Game Build Contest below! Each of these lucky winners will receive a set of limited edition Terraria pins. We will be contacting the winners individually to arrange shipping and other details. Congrats! 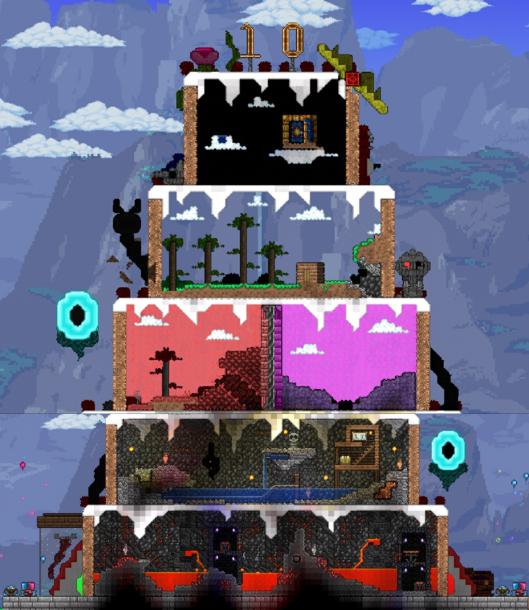 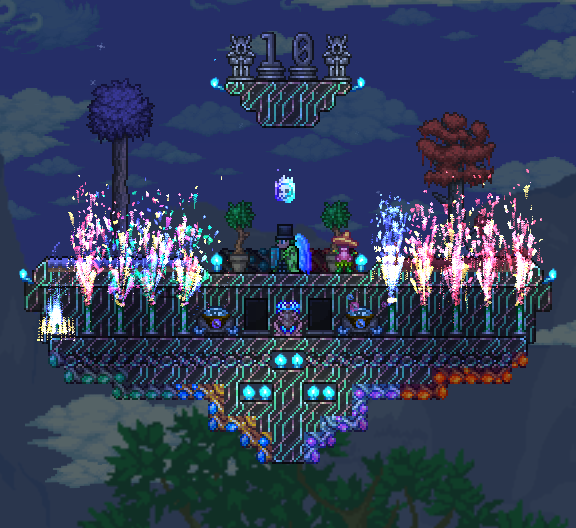 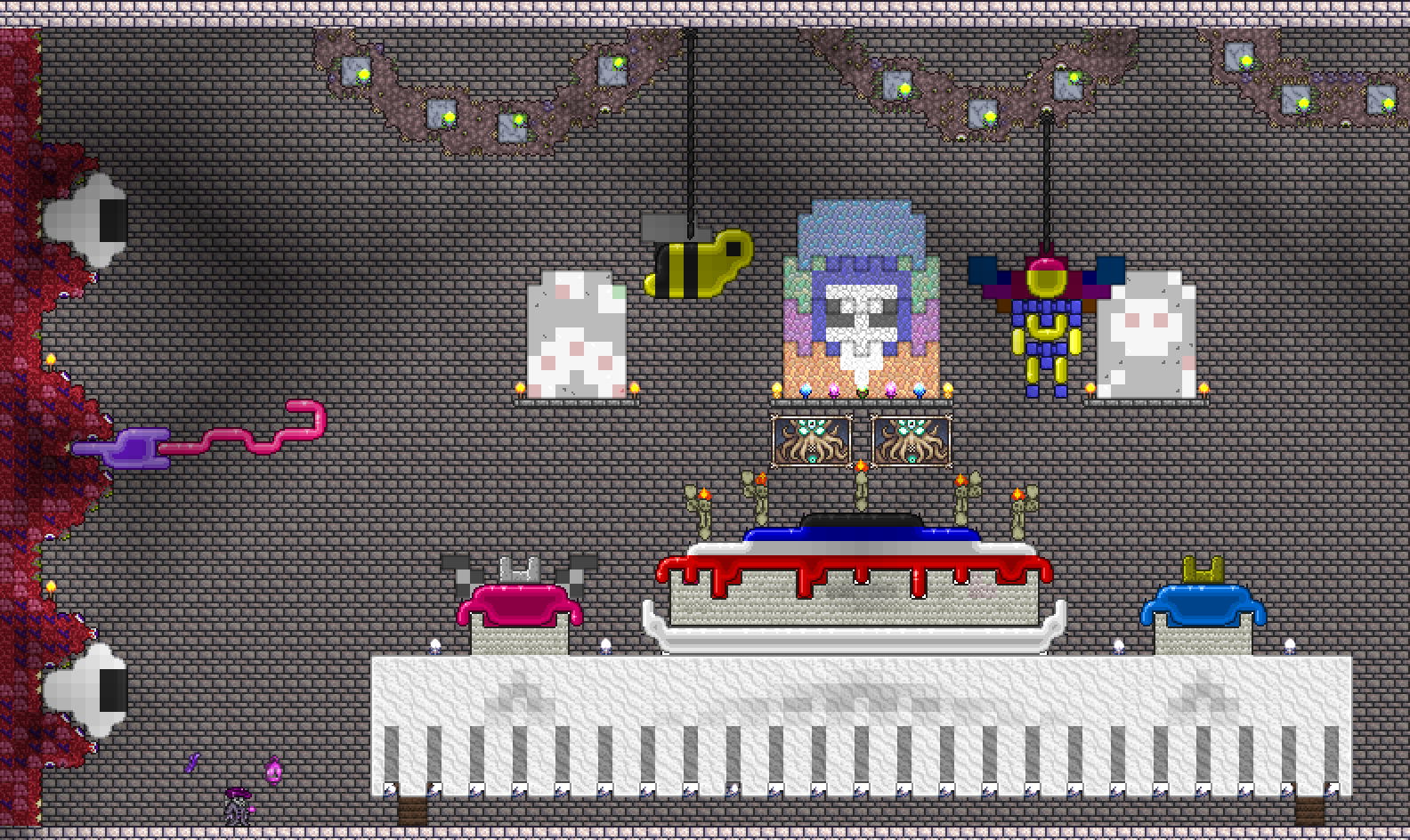 TENTH ANNIVERSARY - WINNERS OF THE TO TERRARIA WITH LOVE CONTEST

Our second pre-anniversary contest had Terrarians crafting their very own 10th Birthday Cards to Terraria. We are happy to reveal the winners of this contest below! Each of these lucky winners will receive a set of limited edition Terraria pins. We will be contacting the winners individually to arrange shipping and other details. Thanks for these, we had so much fun and so many trips down memory lane in reading all of these - really well done! Congrats! 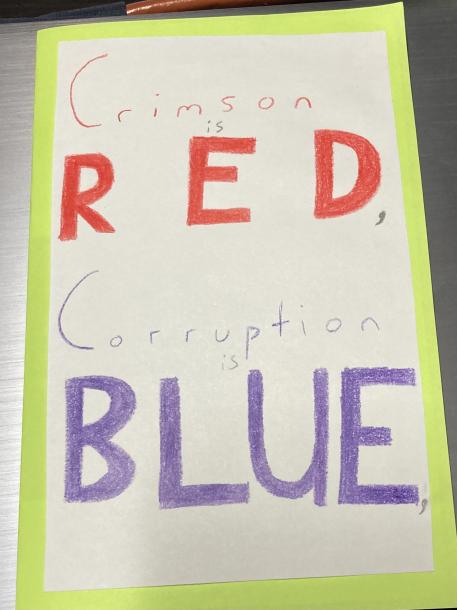 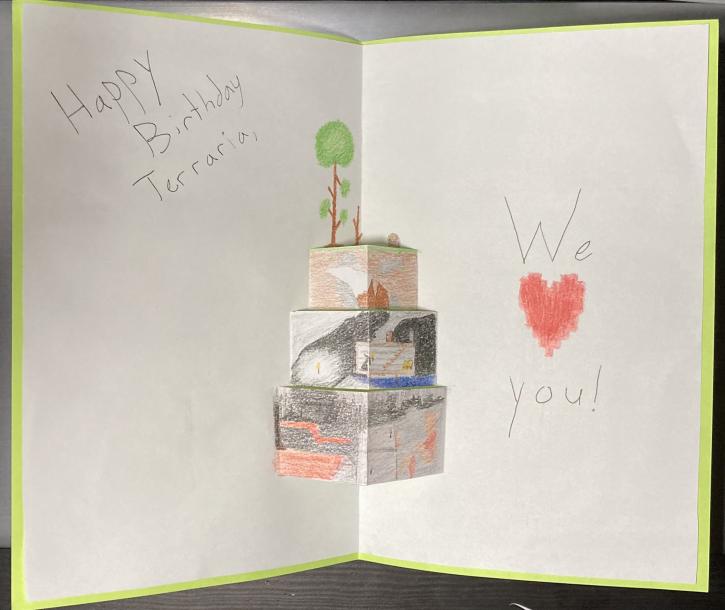 From Discord: Even Bigger Law 𝔅𝔦𝔱𝔠𝔥#9079 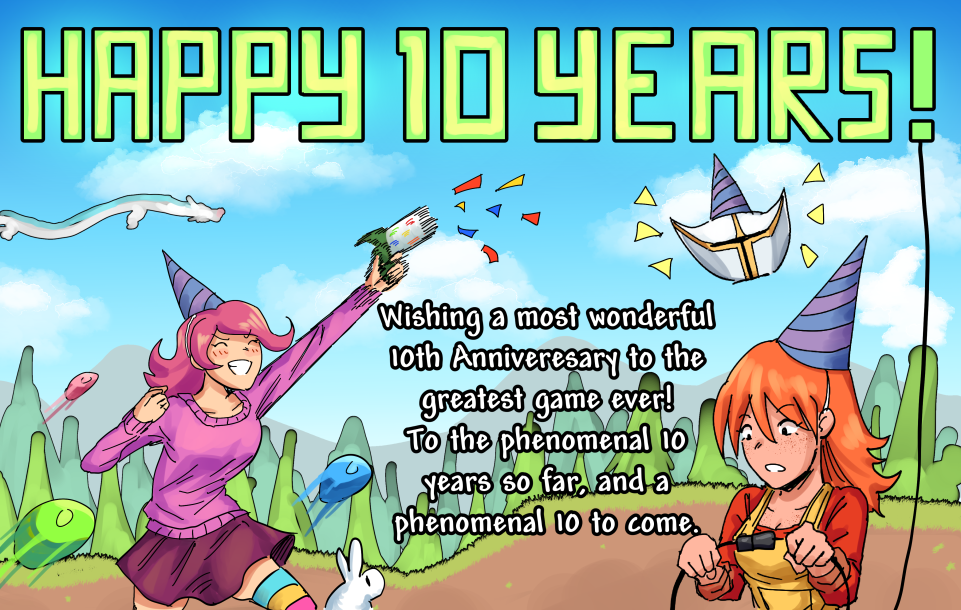 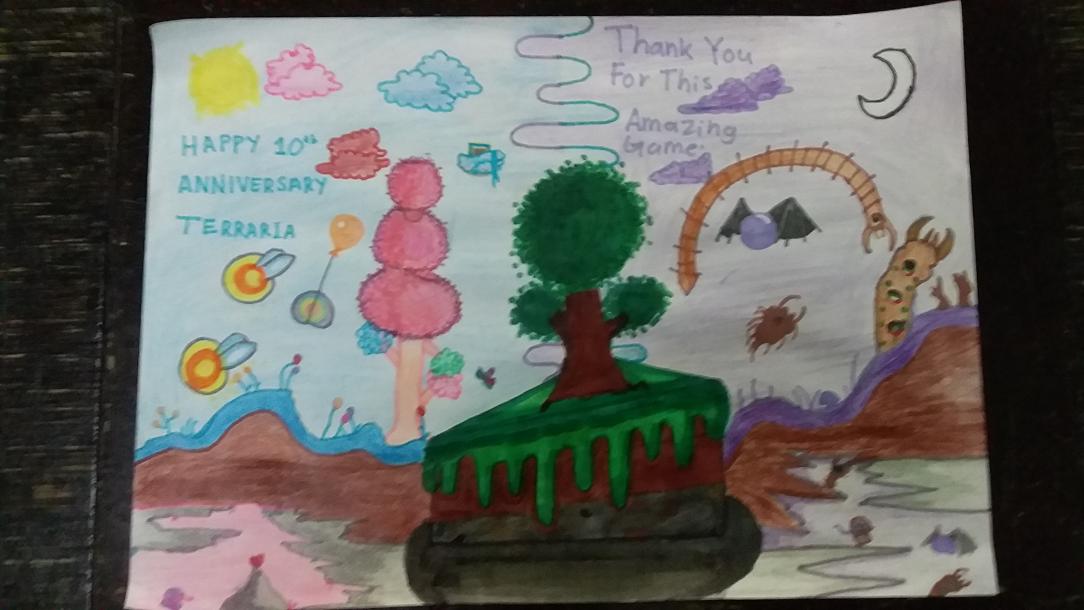 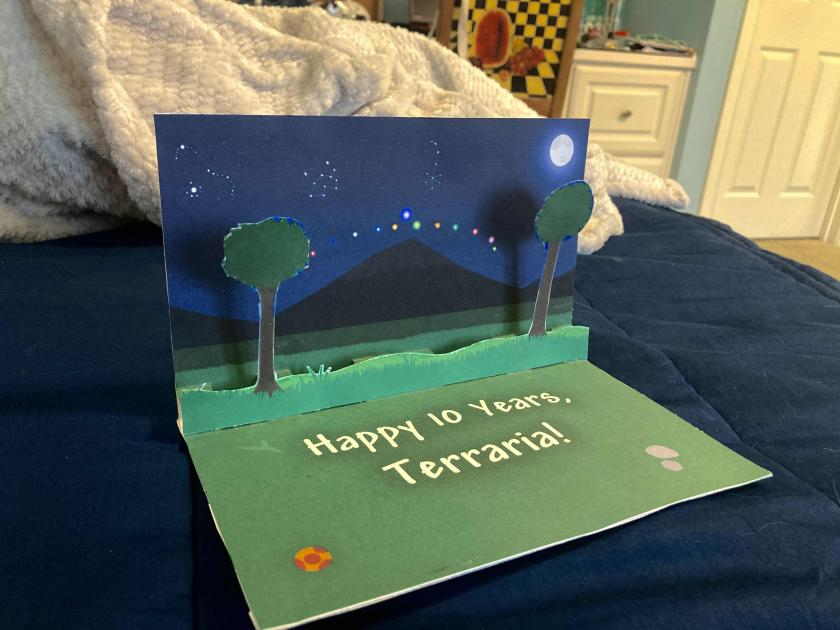 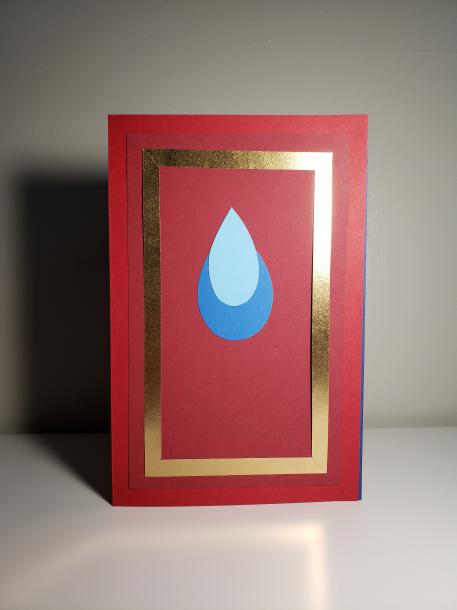 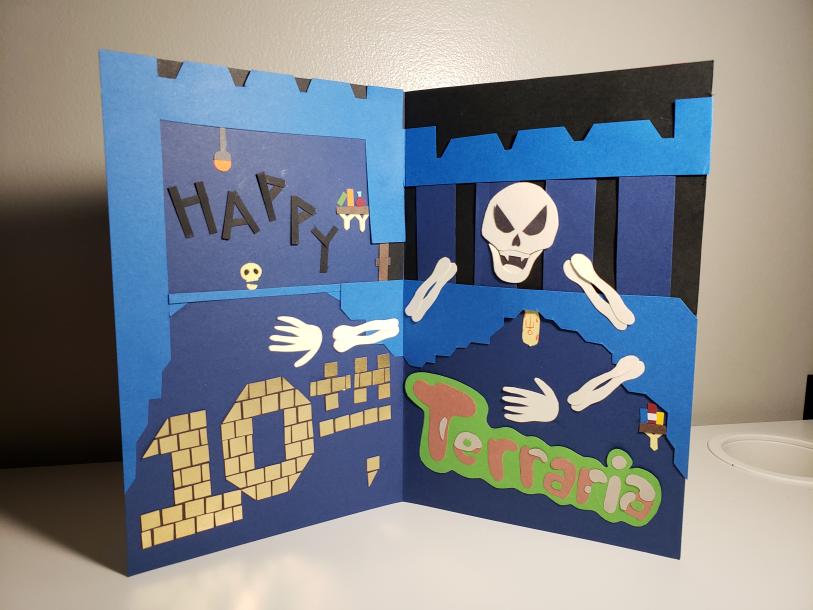 We Have More Winners - Grand Prizes Claimed on Terraria Discord Server!​
Congratulations Moonz, Doggo, and jbooster on being epic Terrarians!

Let us put our hands together and give a massive round of applause to jbooster#6905, Doggo#5662, and Moonz#0187 for winning the grand prize available in the official Terraria Discord server prize shop. Moonz, Doggo, and jbooster earned 2.5 million prize points and used all of them to unlock The Winner role and some incredible prizes including signed merchandise, Terraria collectibles, and much more.

Until next time, Terrarians - we hope you have an amazing month, and we look forward to bringing you the latest and greatest next time!

I just love to see this

and here's to 10 more years

Can't wait for all the stuff on mobile and cross platform multiplayer.

Keep it up Re-Logic! Love your work.

I am shocked by the results of the contests. I have no words to describe it.
I had SO much work put in those entries, and people who did it with low effort won!! This is unbelievable!
I'm so sad to see this.. My work was not appretiated, it was... thrown in the trash.
I'm losing faith in Terraria's Developers.
And I don't know if I put much work in the next contest.

>>Terrarian<< said:
I am shocked by the results of the contests. I have no words to describe it.
I had SO much work put in those entries, and people who did it with low effort won!! This is unbelievable!
I'm so sad to see this.. My work was not appretiated, it was... thrown in the trash.
I'm losing faith in Terraria's Developers.
And I don't know if I put much work in the next contest.

Wow!!! Congratulations to the winners of the contest! I didn’t win but I’m proud of those who did!

RIDZ said:
be happy that you got to Participate in it
Click to expand...

Dude, you need to realize that this happens to everyone in varying situations

These entries are not low effort. Some look absolutely stunning! I agree your entry looked nice too but please appreciate other people’s efforts. This is from a guy who has been ignored by everyone his whole life, and this forum welcomed me like a celebrity. Be proud of the people in it.

Blood Bringer said:
Dude, you need to realize that this happens to everyone in varying situations
Click to expand...

But did you see my entries??? Would you expect some of those entries that won to be BETTER than mine or other people's entries? I can't really understand what was the criteria used by the Devs to conclude that.

>>Terrarian<< said:
But did you see my entries??? Would you expect some of those entries that won to be BETTER than mine or other people's entries? I can't really understand what was the criteria used by the Devs to conclude that.
Click to expand...

Okay, I saw it, I get your point, I was once like you. If you really are compassionate about Terraria, you would enter the contest, not seeking for a reward. That’s how I entered, not seeking for the reward, but being a part of this community. Being included is better than nothing.