We know you have been anxious to see some progress on the 1.3 update for Terraria on mobile devices. Both Re-Logic and Pipeworks have also been excited to share some pre-production work that has been completed! This work focuses on the specific features and changes that are required for the Mobile version above and beyond the core codebase.

This small teaser showcases some of what users might expect to see on their mobile devices when the update comes out. This also gives us a chance to show you a little peek into the development process to those who are curious. Note that this is only intended to be sample image and is still very much “work in progress”. 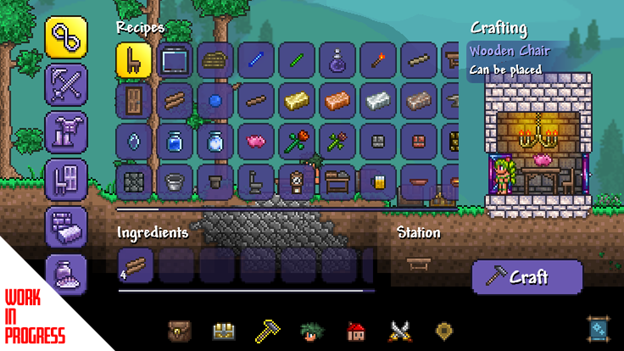 This is a first-pass mockup of the new mobile UI. As you can see, the layout is similar to the PC and console versions, with some alterations to make it fit the mobile screen space. After several rounds of feedback, we have made and continue to work on polish with the User Interface. Primarily, we have tweaked a few things in the UI to be less cluttered; the icons on the left side now have a uniform background, and the menu icons on the bottom of the screen no longer have backgrounds taking up space. This is still very much work in progress, and we expect a few more tweaks to this sample image before it is finalized (with similar work going on at the same time for other parts of the UI).

We also wanted to take this opportunity to update you on our current plans since the original forum post from when we took over console & mobile development of Terraria is no longer accurate.

We’ve been working with both 505 Games & Re-Logic on updated priorities after the console launch. This includes fixing a list of bugs that are still present in the console versions and moving full-speed ahead with Switch development. Mobile development has been focused on UI design and codebase refinement thus far.

In terms of launch order and timing, the nature of game development makes this very hard to predict. Our current expectation is that the Nintendo Switch version of Terraria will launch first, with the mobile update coming out after the Switch version is completed. We are discussing ways to accelerate both paths as well. Currently, we don’t have a timeline on that, but as soon as we have more information we will make sure to share it with you guys.

We want to thank everyone for their patience and support.

Awesome to see some news on this, even if it isn't much. The new UI looks promising and will hopefully also address people's concerns with the controls

Great job!
I am really looking forward to the mobile and Switch version

I just want you to know that the new UI is beautiful, and a vast improvement over what we have now

Staff member
Moderator
Always great to get news! Glad to hear and see the progress made so far ^_^

Really awesome progress on this, the new UI and sprites for it looks pretty dang good. Glad to see you guys doin' a sweet job on Terraria as always.

I am anxious to learn how one will craft Lenses, Fire Flowers, Jungle Roses, Piggy Banks, and Glowsticks... unless, of course, they are placeholders.

While I have a huge amount of appreciation for the ongoing work, I would like to express my frustration that Mobile is being prioritised below the Switch version.
H

Is it just me, or is the lighting engine better (somewhat) in this version?

The chandelier looks to have lighting that fades from yellow to orange, is that just me?

Did you do something with gamepad on mobile?

Are we also going to see a fix for the messed up resolution on some phones? It's near impossible to play with it zoomed in so close.

One step closer to a stable Terraria build on the go!
You guys are doing great!

I don't even play mobile anymore, but it's great to see a new progress update! Hopefully this will address some people's concerns.

Wow! That UI blows my mind. Keep up the instant great work guys. I can’t wait for the update!

I'm very happy with this interface, so far I have a tear on my face, I hope the piece uses the guide to increase the items and increase the zoom distance, because the bosses face much better and fun, thanks to everyone who is with fear updating; D
Last edited: Jun 7, 2018

OMG! I am SO EXCITED!