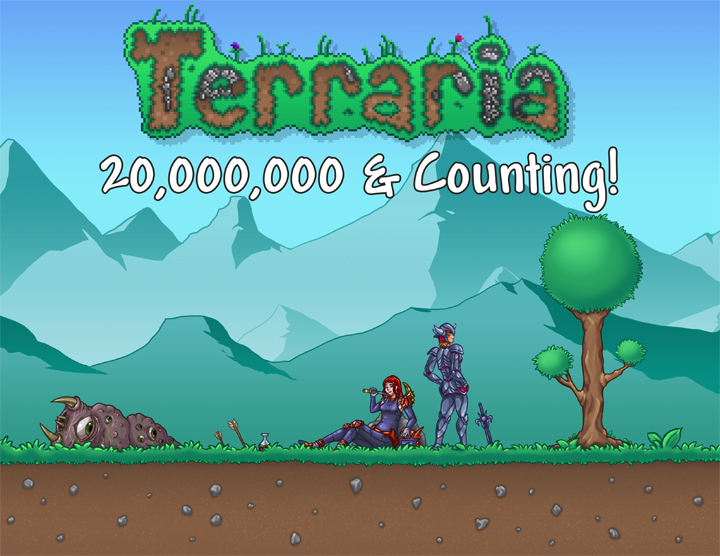 We wanted to take a few moments today to share and celebrate a pretty big milestone with all of you: as of the end of 2016, Terraria has surpassed the 20,000,000 copies sold mark! Since it's launch in May 2011, our 2D sandbox adventure has come a long way - and we owe so much of that to the amazingly strong and loyal support of each member of our community. To say that we are ecstatic about how our little game has grown - in content, in quality, and in success - is putting it mildly!

We wanted to share a few fun facts about how Terraria has evolved over time below, but before we get to that, the entire team would like to say a massive THANK YOU to all of you for making all of this possible. It has been a pleasure to have all of you along on the journey thus far, and we are really looking forward to continuing down that path. Terraria is a game - and a franchise - that has so much life left in it, and we cannot wait to share those plans with you in the months and years to come.

We would also be remiss if we did not send a huge thanks to our fantastic partners at 505 Games - without whom Console and Mobile would never have happened!

The future remains bright for Terrarians as well - with Console 1.3 just around the corner, Mobile 1.3 right behind that, and even more tidbits that we are not quite ready to share (yes, that includes an update on the status of Otherworld - but let's save that for another day and just have fun celebrating this milestone ).

So, we will close again by thanking each and every one of you that have supported us along the way and we hope that you are looking forward to - and will be right here alongside us for - all of the amazing experiences that are yet to come.

Cheers! Terraria deserves all the success it has found, every sale, and every hour players have put into it.

Staff member
Re-Logic
Administrator
It is beyond crazy to think that our game has reached 20 million people! Thank you all so much for your continued support!

Staff member
Re-Logic
This is incredible! The combination of devs, staff, and community that we have going is so unique and amazing! It gives me hope for the future of Terraria and gaming in general

does that make terraria famous

Staff member
Moderator
Re-Logic
Super excited to have been playing and loving this game since launch day, and hope to continue seeing it grow and expand from here!

The Ice Cube said:
does that make terraria famous
Click to expand...

Probably at least one or two Youtube videos about it. Never know.

Been playing Terraria since release, and I've enjoyed every moment of it.

It's been awesome seeing fewer and fewer people going like "What game is that?" and more and more of them going like "Hey, is that Terraria? What's your Steam name? Add me!"

Love this game, thanks for all the updates and content! 20 million copies? This game has gone a long way!

The little game that could!

Staff member
Moderator
Sure, you can be a big Triple AAA studio with a huge array of titles. You can spend thousands on marketing. You can promise a lot of stuff and don't deliver. You can sell DLCs at the base price. You can send review copies to all the big shots in town.

Or you can just be a dozen or so people simply nailing one game and let sociology work its magic.

As much as you are grateful to your community (and of course, you should be), please, always remember that selling twenty million copies doesn't just happen because we, the community, are passionate. It's also, in a large way, because Terraria is just that damn good.

I'm really glad this game got ported! 360 was the first system I bought it on and while I own it on multiple devices now I am really thankful that it was provided to me on a system I already owned

That's what amazes me the most. For Terraria to pull in such a large crowd shows that Re-Logic did a more than awesome job at giving us a game, filled with content that is still coming, that we all can play and enjoy for a long time. Thanks for your hard work, and I hope you continue to impress with Otherworld!

It's amazing to see this beauty of a game come all this way! Cheers to Re-Logic, 505 Games, and Pipeworks Studio!
And Redigit, thank you. If not for you, the game we know and love today wouldn't have even started

20 million? That's pretty amazing! Congratulations to the dev team, and truly, thanks for all the time and effort put into making the game and continuously improving and expanding it. I've been playing since 1.0.3, and I've bought at least five copies of the game for myself and others, and as this game grew, it's definitely made its way onto my list of favorite games. So again...