Not the best at pixel art, but I made this inspired by the Barong of the Bali faith. An animal like spirit that leads the forces of good and fights against Rangda, the demon queen, who leads an army of evil spirits and witches. 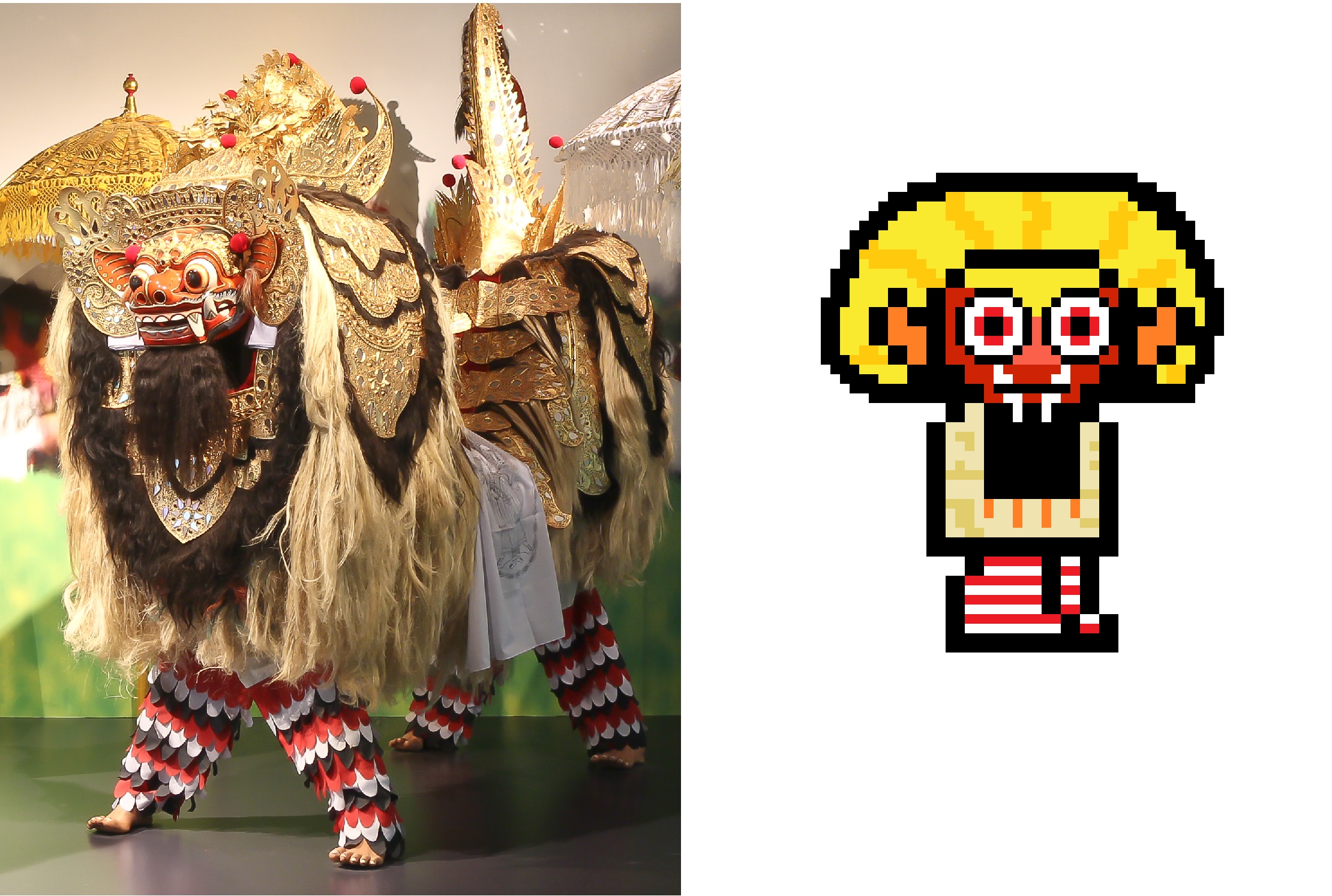 Information is in the picture but I'll also put it here as well so I can clarify some things.

Head Piece (Deadpan Trickster's Hat)
-Black top hat design
-Crimson band around base [of hat]
-Yellow flower in center of [the crimson] band (I'm a poor artist, sorry it really doesn't look like a flower)
-Ace playing cards of all 4 suits coming from yellow flower
-Short golden hair covering one eye (if possible in Terraria as you can only see one eye at a time of a Terrarian anyway depending on which way they're facing. If not possible to only cover one, don't cover any. Also as the hair would be part of the hat, it would cover the player character's hair.)
-(Possibly) Eye(s) each become gold and red (as shown) (As I said "possibly" I mean I'm not 100% about including that part of this design. It sorta seems cool to me but I also also imagine it might be difficult to do in Terraria without also having to make this piece of the suit a whole head item covering the player character's skin as well as their hair as mentioned above. But I'm no expert, you could probably do it easily and I'm just being doubtful. TL;DR I think it's neat but won't be heartbroken if it's not included.)

Chest Piece (Deadpan Trickster's Jacket)
-White undershirt
-Black jacket with crimson cuffs
-White gloves
-Small "necklace-like" cape. Said cape is black on the outside and crimson underneath. Cape is held by heart shaped crystal on character's chest. (Possibly cracked as shown.) (I tried my best to show what I wanted for the cape in the picture but I think I did kinda poorly so hopefully this description helps. As for the heart crystal connecting piece being cracked or not, I'm on the fence so I'll leave that up to you guys.)
-Jacket has two small flaps continuing slightly down back of character's legs. (Like with the cape, I feel I didn't portray this part very well in the picture so I hope my description helps. Also, these flaps are supposed to be part of the chest piece of the set, not the legs.)

Leg Piece (Deadpan Trickster's Leggings)
-Black leggings
-Black boots that are curved up at the toes
-Crimson band at the top of each boot
-Bottom potion of boots is white
(Yeah, the leg piece was a lot simpler than the other things I did.)

Anyways, sorry for this wall of text, but hopefully I could explain everything necessary. Hope you guys enjoy it, 'twas fun to make, and good luck to all other participants! 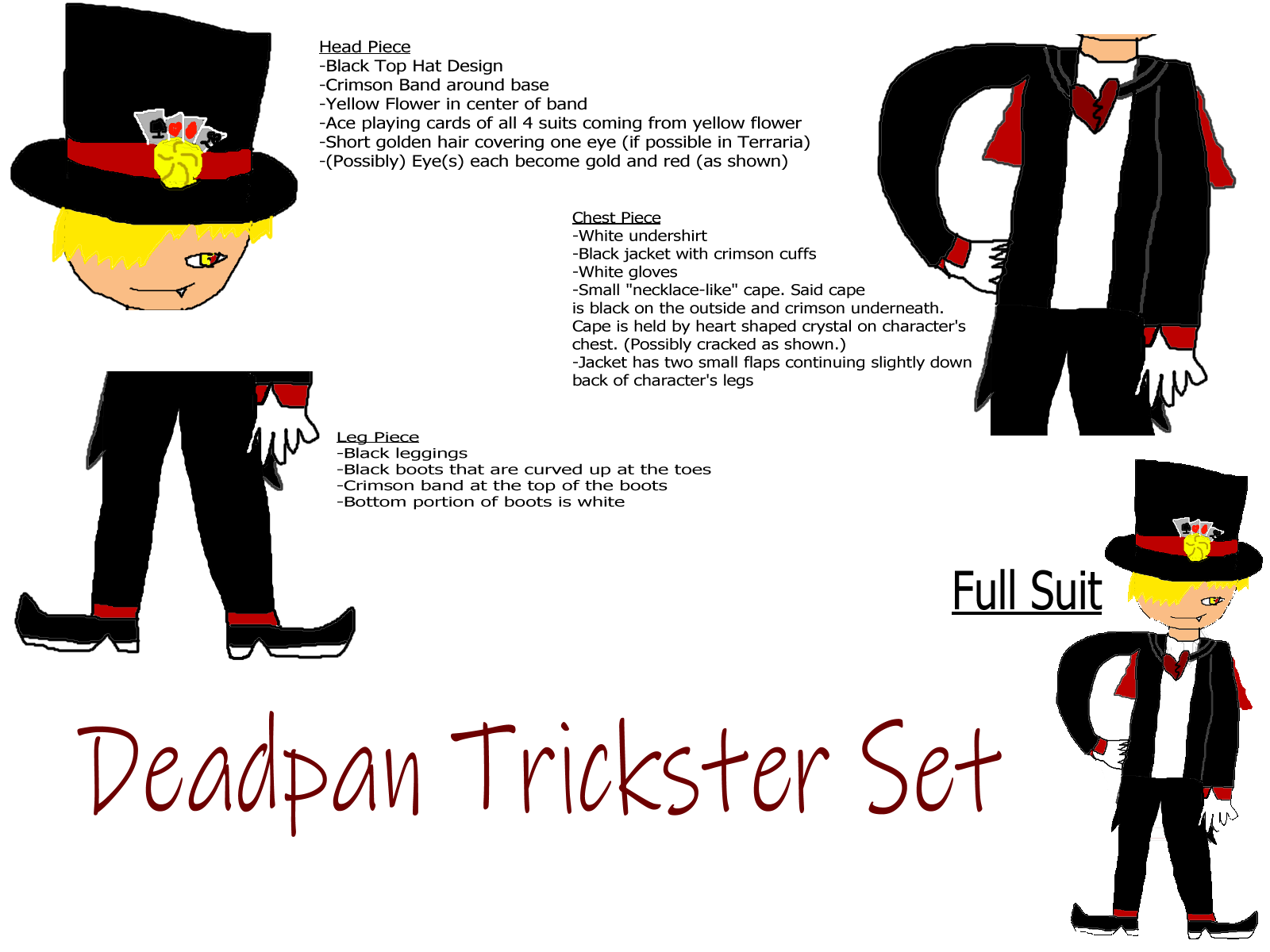 plus its kinda like a small change from the last one made on terraria!

some of a color code--- brown hat, sunglasses/shades, red bandana, black gloves, brown pants, brown shirt w/ grey ammo belt and yellow bullets, bottom of shoes just black
and the picture of terraria is not mine just the previous set used in the game, also I found it on the web so credit to the man who made it.
plus the set name I kiiiiiinda think would fit my vanity set would probably be Sherrif's ____. for example.. Sherrif's Hat, Bandana and Glasses, Sherrif's Leather Jacket (w/ ammo belt and star,) Sherrif's Mighty Boots, and that's about it for my decent vanity set! Thanks for looking at it!

This is my submission. The design was made anthropomorphizing a spaceship from a game that never came to be that I participated in. 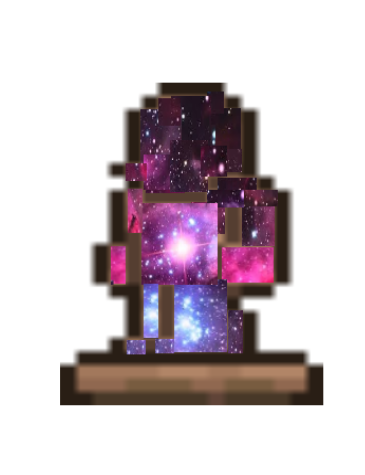 a celestial body, I'm no artist so I took apart an image and put it to a mannequin 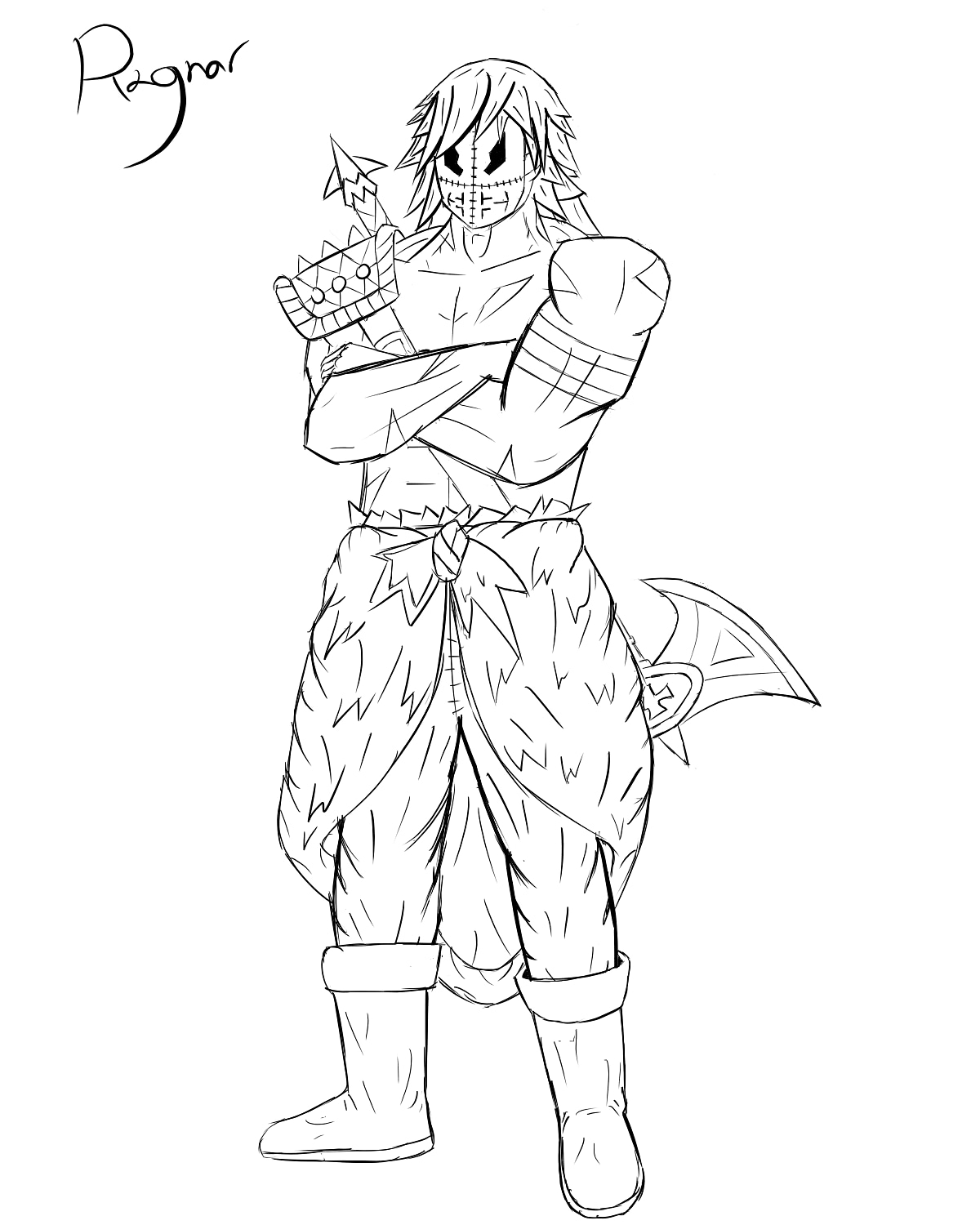 I created this beautiful beast cause I got bored and did it with my friends and I was really happy with it. I'd love to see this big guy on the game me and my friends used to love playing together so I can have something to remember with my old pals.

Ragnar The Inferal:
Head: Mask of The Infernal
The Mask of The Infernal will include both the hair and the mask.
The hair is brown and his mask looks like burnt stiched leather with pitch black menacing eyes that can send chills down even Skeletron's spine
Torso: Ragnar's Shoulder Guard
A leather shoulder guard topped with steel spikes, not the most protecting armor but Ragnar doesn't need protection.
Legs: Ragnar's Bear Hide
Wearing cloth pants and leather boots with a bear hide around his waist from a 800lbs grizzly he choked to death with his bare hands.
Last edited: Mar 16, 2020
S

This is my submission for the contest. The fire is crudely drawn, but I'd like for it to cycle through the different colors

I would like to call it "SoundWave's Star Inferno."

I Think it would be dropped as a full set from the new Nautilus Shell, or Mothron
Last edited: Mar 15, 2020
A

A bit bad However I would love a Pleague doctor vanity costume. 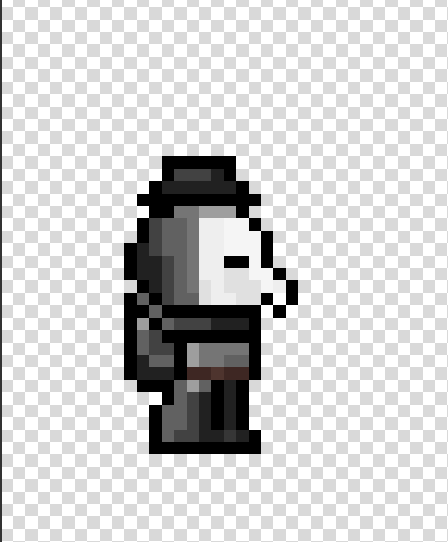 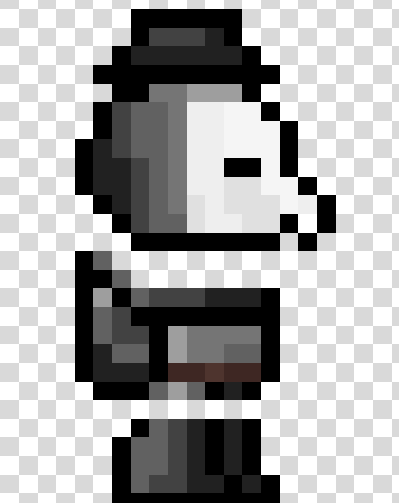 As we all know how every armor in the game has a very good palette, so I came up with the idea of... Horrendous Armor!
(Also comes with the mighty Horrendous Spear!)
The idea is that the armor slowly brightens the less health you have with the max health of 400 (Before Journeys End.) to the minimum of 0. (Left to right.)
The idea is that this stuff is as hard as the bone key to get but is the worst armor in the game. I dont know if this will be possible but thats my personal take on it. Have fun with the design. 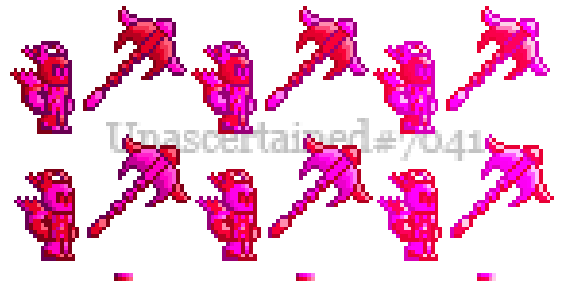 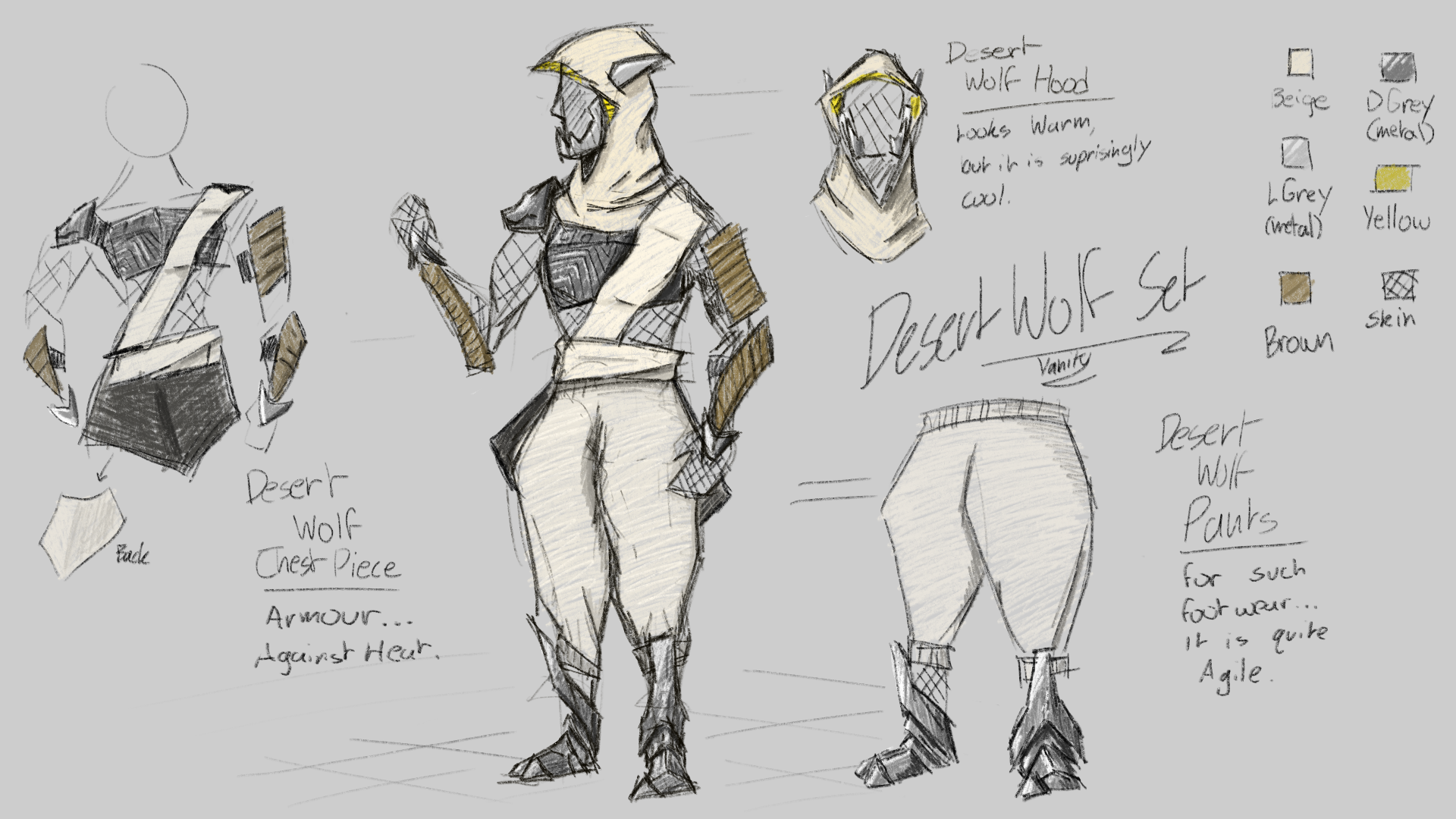 This is the Desert Wolf Vanity Set
This is a Rare drop from Medusa or Hoplite in separate pieces, or from a Mothron Goody Bag.

-Also it is very generous of you guys to allow all of us the share what we have.

Forbidden Cloak, I like the monochromatic grey color scheme. I think it turned out alright. 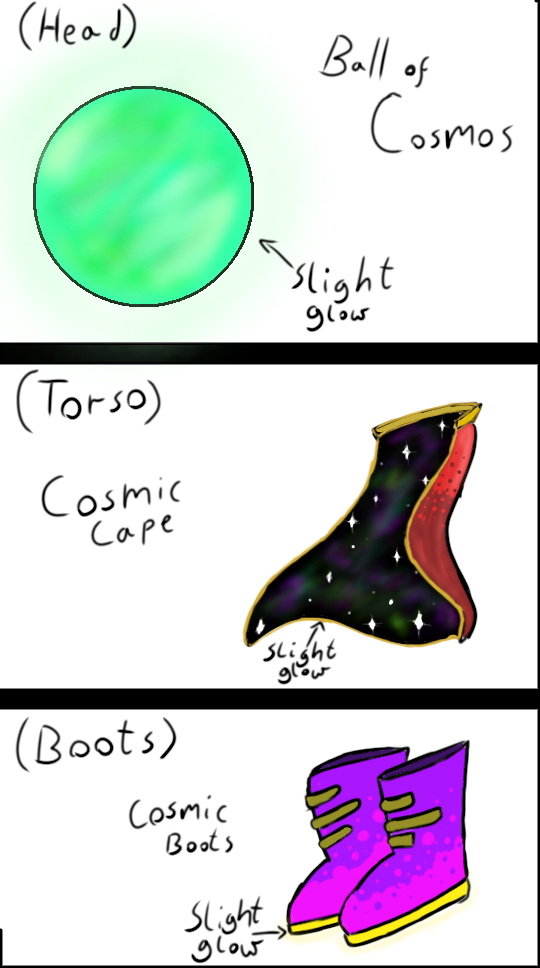 You can change it and resprite it in any coulor you want (and change pattern). But i would love to have a mysterious foggy ball on my head and the cape to! ( cape has a changing galactic pattern on the inside) and please forgive my poor drawing skills

I sprite in my spare time for passion projects among other things. This is something I designed for a different project, but never got to use. It's my own design so there should be no issue making it into a cosmetic set in this game.

Basically, it's a spacesuit with a dome head. I don't have any drawings or artwork because I can't draw so this is what I can submit.